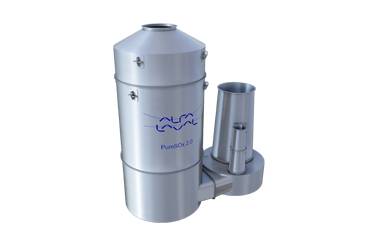 Alfa Laval reports its scrubber solution PureSOx has been the subject of many repeat orders. One of the major returning customers is the Grimaldi Group, which has now ordered its 10th installation of Alfa Laval’s exhaust gas cleaning system.
The Grimaldi Group is a multinational logistics group specialized in the operation of RoRo vessels, car carriers and ferries. Through the maritime services of Atlantic Container Line, Finnlines and its other companies, the Naples-based group transports passengers, nearly any type of rolling cargo as well as containers and general cargo.
Since PureSOx was chosen for four of its Finnlines RoRo ferries, the Grimaldi Group has continued to invest in the scrubbers. Installations are underway aboard Atlantic Container Line newbuilds that will be the largest ConRos in the world, and the Group’s tenth system was recently ordered for yet another Finnlines vessel.
“We are very satisfied in our dealings with Alfa Laval, in terms of both project execution and the technical performance of the PureSOx scrubber,” says Emanuele Grimaldi, Managing Director of the Grimaldi Group together with his brother Gianluca. “The systems already delivered have all received class approval, and we expect equivalent results from the deliveries in progress.”
The Grimaldi Group’s first experience with PureSOx was in 2014, when potential SOx scrubber solutions were evaluated for four of its existing Finnlines vessels. “Today, there are several suppliers in the maritime scrubber market and even more that are eager to enter. However, there are just a few that passed the tight criterions set for our selection process,” recalls Dario Bocchetti, Energy Saving Manager, Grimaldi Group. “When shortlisting the candidates, a detailed analysis on access to core expertise, existing references, technological platforms used, delivery capability, project coordination capabilities as well as future service and support was done.”
All four of the Finnlines vessels, which offer service in the North Sea and Baltic Sea, were retrofitted with open-loop PureSOx systems sized for operation in low-alkalinity Baltic waters. The Finnmill and Finnpulp received multiple-inlet systems, while single-inlet systems were installed aboard the Finnhawk and Finnkraft. In all cases, the systems were designed to facilitate later conversion into hybrid systems.
Alfa Laval has a long history of experience in working with scrubbers, as well as a structured method for preparing a PureSOx installation. In the Finnlines projects, this contributed to an extremely efficient retrofit procedure. The vessels were able to run on HFO as soon as installation was completed, and the commissioning of the PureSOx systems by Alfa Laval took only around 1.5 weeks per vessel. After this, the crews were fully trained and the 100% operational systems were ready to have their compliance evaluated by RINA Services.
“The cooperation between Finnlines, Alfa Laval and RINA Services was very efficient and professional during the projects,” says Massimo Volta, General Manager Northern Western Europe for RINA Services. “Commissioning was directly followed by Site Acceptance Tests performed by Alfa Laval and RINA Services, which resulted in class approval for all four PureSOx systems. We are all very satisfied with the project results and the cooperation between the involved parties.”
Today the Grimaldi Group has five new PureSOx installations underway, this time at Hudong-Zhonghua Shipbuilding in Shanghai. The current projects are newbuild ConRos for Atlantic Container Line (ACL), intended to replace existing vessels in ACL’s transatlantic service. Not only will the Atlantic Star, Atlantic Sail, Atlantic Sea, Atlantic Sky and Atlantic Sun be faster and greener than their predecessors, they will also be the largest ConRo vessels in the world.
Once again, strong cooperation is ensuring a smooth working process. “In a newbuild project it is very important to fix the design of the scrubber system, which we were able to do quickly through good cooperation with Hudong and Alfa Laval,” says Andrew Abbott, President/CEO of ACL. “During the installation period, Alfa Laval is supplying local and central installation support to facilitate installation and limit the start-up risks during commissioning.“
Following installation, Alfa Laval will commission the systems in close cooperation with ACL and the shipyard. Once again, Site Acceptance Tests will be performed by Alfa Laval and RINA Services immediately after the commissioning. “We are looking forward to bringing these newbuild projects to a positive conclusion,” says Abbott.
With work on the ACL newbuilds proceeding smoothly, the Grimaldi Group has placed yet another PureSOx order for the retrofit of a Finnlines vessel. The MS Finnmerchant will be deployed on a new Finland-Germany route between Hanko and Rostock, and again PureSOx was determined to be the best solution for meeting ECA requirements in the Baltic.
Alfa Laval project manager Mark Aarbodem is eager to continue the relationship. “I am looking forward to serving Finnlines during the warranty period for the first four vessels, and to completing the current project for the Finnmerchant together with the project team.”
Finnlines, too, is pleased to resume the working partnership. “We have seen that there is a well-functioning chain from purchase to commissioning,” says Thomas Doepel, Head of Purchasing Department at Finnlines. “We have every confidence in Alfa Laval’s abilities.”
“The Finnmerchant will be the tenth installation of Alfa Laval PureSOx for the Grimaldi Group,” says René Diks, Manager Marketing & Sales, Exhaust Gas Cleaning at Alfa Laval. “We are proud of the continuing trust that the group has placed in Alfa Laval and our exhaust gas cleaning technology, and we are pleased to have it affirmed by class approvals of the first scrubber installations.”
alfalaval.com