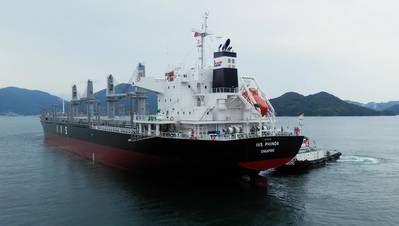 Grindrod Shipping Holdings announced that it took delivery of the IVS Okudogo, the first of the two owned ultramax “eco” newbuildings that the Company agreed to acquire in May 2018.

In conjunction with the delivery, the global provider of maritime transportation services in the drybulk and product tanker sectors, also announced the completion of a drawdown of a portion of the previously announced $31.4 million indicative newbuild financing with IYO Bank for the vessel.

The $15.7 million facility relating to the IVS Okudogo has a seven-year term, is repayable in quarterly installments with a balloon payment at the end of the repayment schedule, bears interest at a rate of LIBOR plus 200 basis points per annum and is secured by, amongst other security, the IVS Okudogo.

Following this drawdown, $15.7 million remains available for the purchase of the IVS Prestwick, which the Company expects to take delivery of in September 2019.

Grindrod Shipping owns and operates a diversified fleet of owned and long-term and short-term chartered-in drybulk vessels and product tankers.

Cathelco, part of Evac Group, has won an order to deliver marine growth prevention system (MGPS) for a new multi-purpose…