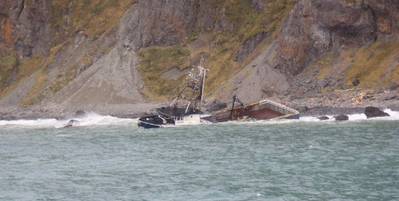 According to the Alaska Department of Environmental Conservation (DEC), grounded fishing vessel Arctic Hunter has leaked approximately 6,000 gallons of diesel fuel and 400 gallons of hydraulic lubricating oil, and a light sheen was seen surrounding the vessel.

Resolve-Magone Marine Services has secured pollution sources on the vessel, the report said, and the company will conduct further salvage operations as weather conditions allow.

The 102-foot vessel was estimated to be carrying 12,000 gallons of diesel fuel when it struck ground November 1, 2013 on the east side of Unalaska Bay, approximately five miles northeast of Dutch Harbor, Alaska.

The U.S. Coast Guard is investigating the cause of the incident.