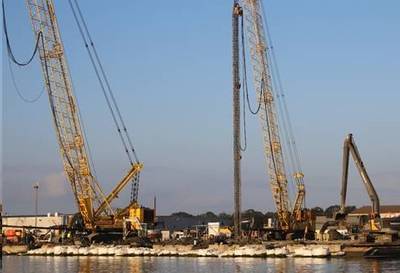 The detailed design phase is "rapidly progressing", the shipbuilder said, and the 460-foot icebreaker is the heaviest vessel per foot of length that Halter Marine has constructed. The launch way has been fortified to accommodate the PSC’s 19,000-ton launch weight.

Bob Merchent, President and CEO of Halter Marine. “The PSC needs 22 tons of capacity per linear foot of rail line, and we have designed the new launch way to accommodate 27 tons per linear foot. We are preparing for our newest vessel while also looking forward to future, larger vessels.”

The launch way upgrade project is funded with a grant from the Mississippi Development Authority (MDA) and is scheduled to be completed in July 2021, Halter Marine said.

The upgrade began in July 2020 when 11 launch way rail lines were removed. Next, crews dug 1,283 holes that were filled with grout and concrete to serve as new piles. These piles will transfer the PSC’s heavy load to a deeper level than previously possible.

“Each drilled hole is 110 feet long, and we are pouring 27 miles of piles,” said Kevin Amis, Executive Vice President of Operations for Halter Marine. “We are completing this project with a perfect safety record.”

The launch way upgrade is among a number of shipyard improvements underway in preparation for the high-profile PSC build. In November, Halter Marine announced it added a new plasma cutter to prepare for the project.

The shipyard is also looking to add staff and has launched a new apprenticeship program as it aims to double its workforce for the build program.