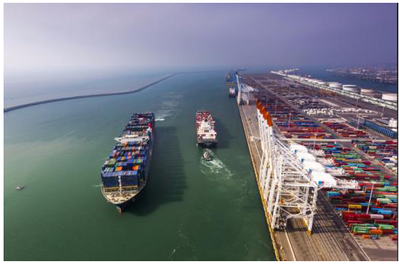 In a bid to raise the maritime container trade between French port HAROPA and Indian ports, a power-packed delegation is visiting India from February 20-23 to hold road shows in four cities across the country.

During the visit, the delegation led by Mr Herve Martel, CEO - Port of Le Havre & President- HAROPA ports will meet customers , trading partners, key port authorities and officials to scout for new prospects and opportunities as also senior government officials to exchange information on various maritime issues  with a view to further enhance Indo French Maritime trades. The road show will take place on Feb 20 at New Delhi, Feb 21 at Chennai, Feb 22 at Ahmedabad and conclude in Mumbai on Feb 23.

“During 2015-16, India transshipment on HAROPA has increased by over 39% over the previous year. The maritime traffic between the Indian sub-continent and HAROPA continues to grow over 5 % (with a significant growth of 7 % with Indian ports (2015vs2016). All indicators are encouraging and positive for a continuous and prosperous trade relationship India & France,” said Mr Herve Martel, CEO - Port of Le Havre & President- HAROPA ports.

HAROPA – the Gateway to Europe has the potential to make Indian exports more competitive in the international market, with the bilateral trade between India and Europe and India and France being estimated at about Euro 9 billion, well below potential.

“The objective of the road-shows is to reach out to the Indian trade and gather their inputs to better facilitate transit of cargo through a simple, yet rapid, secure, easily accessible and low-cost customs clearance at HAROPA – the Gateway to Europe,” said Captain Avinash Batra, India representative, HAROPA and also chairman of Seahorse Ship Agencies.

The HAROPA alliance created in 2012 is a joint venture between the French ports of Le Havre, Rouen and Paris. Ranked as the 5th biggest North-European port, HAROPA is positioned as a major maritime hub in Europe, equipped with a competitive and sustainable logistics system.

Located close to the most important European consumer market with facilities and directly linked to the UK, HAROPA offers competitive edge with connectivity with 600 ports served by 60 shipping lines.