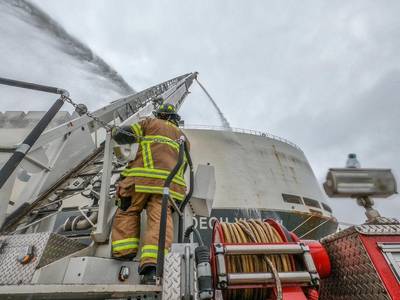 A three-alarm fire that broke out aboard vehicle carrier Höegh Xiamen in the Port of Jacksonville last week continues to burn but has been controlled and contained, authorities said Monday.

Firefighters with Jacksonville Fire and Rescue Department (JFRD) and specialist marine firefighters with Resolve Marine Group are working to maintain the structural integrity of the 600-foot roll-on, roll-off (RoRo) ship and reduce the threat of any environmental impact to the river. Containment booms have been placed around the vessel as a precautionary measure, though no pollution has been reported.

The fire erupted around 4 p.m. Thursday shortly after the vessel completed loading at Blount Island, in Jacksonville, Fla. Authorities believe the fire broke out on the ship's seventh deck before spreading through several other levels up to the 11th deck.

All of the ship's 21 crew members were able to debark the ship uninjured.

More than 120 firefighters responded to the incident. Two of the eight firefighters injured while battling the blaze went in for surgery today, and the other six have been released from the hospital, JFRD Chief Keith Powers said Monday.

The 12,250 dwt Höegh Xiamen is a 4,900 ceu vehicle carrier built in 2010. The Norwegian-flagged ship is owned by Höegh Autoliners and currently operated via vessel charter by Grimaldi Group. AIS data shows the ship's most recent port call before Jacksonville was Freeport, Texas. Its next scheduled stop was to be Baltimore.

The Jacksonville Port Authority (JAXPORT) said its other cargo operations have not been impacted by the incident. The Northeast Florida commercial cargo port is one of the largest on the Atlantic Coast and is among the nation’s busiest car ports.