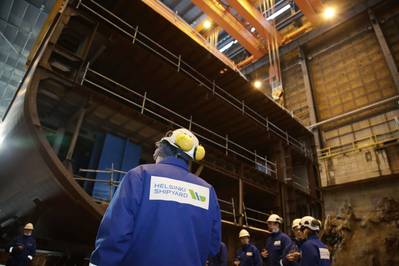 Finnish shipbuilder Helsinki Shipyard said it has laid the keel of the third of three Vega-class polar expedition vessels for Swan Hellenic.

The keel was laid with outfitted grand block 305 that arrived at the shipyard during week 50 in 2021 among several blocks for the newbuild on board the carrier vessel M/S Meri.

Construction is proceeding smoothly, the builder said. More than half of the block deliveries have already arrived from the block supplier, and the rest of the blocks will arrive during April-May. The four main engines have already been lifted onto the ship hull as well as the two fin stabilizers.

The Vega-series’ vessels being built at Helsinki shipyard represent the next generation of polar expedition vessels, and once delivered they will sail worldwide with a strong focus on high-latitude areas.

The vessels feature a 4.6-megawatt (MW) diesel-electric hybrid propulsion system with selective catalytic reduction (SCR) and a 3MW max. battery package. Gross tonnage of the two first vessels is 10,500 tons, and they have a PC5 ice-strengthened hull. The third ship, being slightly bigger than her sisters, is 12,100 gross tons with a PC6 ice-strengthened hull.

The first of the vessels, SH Minerva, was delivered in December 2021 to Swan Hellenic, and the delivery of the second one is scheduled for the Spring of 2022. The third vessel, NB 518, will be delivered to the client in the beginning of year 2023.

“Newbuilding NB 518 is designed for extreme weather conditions, from the heavy ice of the polar regions to the heat and humidity of the tropics, respecting the sensitive ecosystems of the rare and extraordinary regions she will explore,” said the Project Manager of NB 518 Nicklas Forsström.