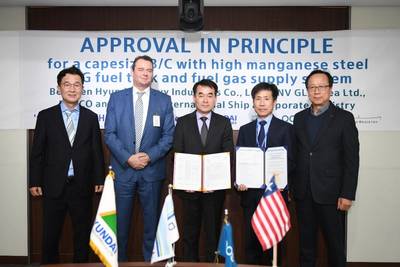 HHI has developed the design of LNG Dual Fueled capsize bulk carrier in accordance with the RU-ship of DNV GL and IGF Code as well. From the design phase, high manganese steel was considered for LNG fuel tank due to its higher strength and toughness at cryogenic temperatures with affordable price. POSCO technically supported the development by providing research data of high manganese steel through several mock-up tests and field applications. DNV GL experts assessed the design of LNG fuel tank, Fuel Gas Supply System (FGSS), general arrangements, machinery spaces and risks associated with those systems except for hull and marine systems via HAZID Study. Liberian Registry was involved in the design review including attendance in the HAZID workshop and approved the design based on DNV GL’s assessment results.