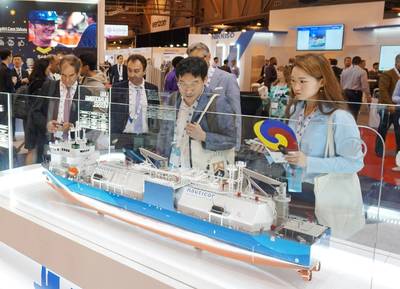 A General Approval is a higher level of approval issued by LR than an AiP (Approval in Principle). Based on this latest approval granted, HHI plans to complete a full-fledged demonstration process of HiMEX by 2020.

HHI Group also unveiled, in the limelight of ship owners, the latest achievements of its optimal solution for LNG carriers built on its own developed high-efficiency LNG fuel supply system (Hi-SGAS) and a single mixed refrigerant system (SMR).

“This new LNG system recently showcased and the General Approval granted by LR mean that our world-class technical excellence has been once again recognized,” said an official of HHI Group. “While staying committed to further advancing LNG-related technologies in conjunction with leading international providers of classification, we will also work on new technologies for future ship fuels and propulsion systems to enable decarbonization in shipping.”

HHI  received orders for 12 LNG carriers year-to-date, winning the largest volume of orders globally for two consecutive years, as well as orders for 12 LNG-fueled ships which are increasingly drawing attention as the next-generation eco-friendly vessels.