This Day In Naval History: August 31 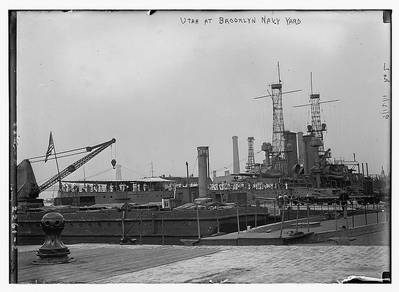 1842 - Congress replaces the Board of Navy Commissioners, a group of senior officers who oversee naval technical affairs, with the five technical Bureaus, ancestors of the Systems Commands. One of the 1842 Bureaus, the Bureau of Medicine and Surgery, continues to serve under its original name.

1862 - The daily rum issued to US Navy sailors on board vessels is abolished. On July 14, by an Act of Congress, the spirit ration ceases Sept. 1. Secretary of Navy Gideon Welles issues a further order requiring captains of naval vessels to remove all distilled liquors from their ships except those that serve as medical stores. Ale, beer, wine, and other liquors not distilled are exempted from the provisions of the act of July 14.

1911 - USS Utah (BB 31) is commissioned. During World War I, she serves in the Atlantic protecting convoys. In 1931, she is converted to a radio-controlled target ship and is redesignated (AG 16). Utah spends the rest of her career in this role, with additional duties as an anti-aircraft gunnery training ship beginning in the mid-1930s. On Dec. 7, 1941, while moored at Pearl Harbor, Utah is hit by a Japanese aerial torpedo attack, rolls over and sinks. A few years later, her hull is partially righted and moved closer to Ford Island, where she remains today.

1962 - The last flight of a Navy airship was made at Naval Air Station, Lakehurst, N.J.

1990 - Iraqi merchant vessel, Al Karamah, is boarded by the crew of USS Biddle (CG 34) in the first interception during Operation Desert Shield.