This Day In Naval History - March 9 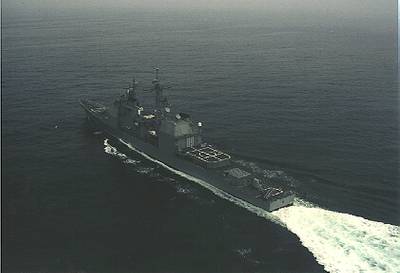 1847 - An Army-Navy force begins the siege of Veracruz, Mexico. Approximately 12,000 U.S. troops land on the beaches, along with their horses, mules, artillery, and supplies. Veracruz surrenders March 29, and the forces make their way to Mexico City.

1862 - In the first battle between ironclads, USS Monitor and CSS Virginia engage in close combat in Hampton Roads, Va. Neither side could claim victory, but it eventually ends the era of wooden ships.

1919 - The first flight from a battleship platform is made by Lt. Cmdr. Edward O. McDonnell in a Sopwith Camel from turret No. 2 of USS Texas (BB 35) while anchored at Guantanamo Bay, Cuba.

1944 - USS Lapon (SS 260), while pursuing a Japanese convoy in the South China Sea, sank two freighters and survived a counterattack by Japanese gunboat.

1991 - USS Cowpens (CG 63) is commissioned in Charleston, S.C. The 17th of her 27-ship Ticonderoga-class of guided-missile cruisers, Cowpens is homeported at Naval Base San Diego.