This Day In Naval History: June 6 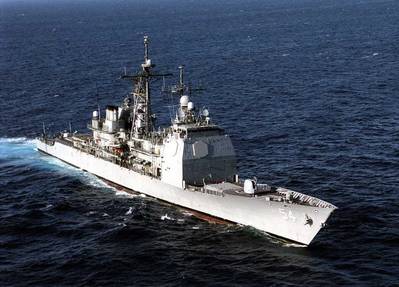 1918 - After Allied troops take Hill 142 at Chateau-Thierry, France, during World War I, 12 enemy soldiers crawl in a position to counter attack with five light machine guns. Realizing his company might withdraw if fired upon, Marine Gunnery Sgt. Maj. Ernest A. Janson, quickly rushes and bayonets two enemy leaders, forcing the rest of the enemy attackers to withdraw. For his "conspicuous gallantry and intrepidity" on this occasion, he is awarded the Medal of Honor by both the U.S. Navy and the U.S. Army.
1918 - During World War I at the Battle of Belleau Wood, Lt. j.g. Weedon E. Osborne is killed in action while attempting to rescue a wounded officer. For his "extraordinary heroism" on this occasion, he was posthumously awarded the Medal of Honor.
1942 - During the Battle of Midway, planes from the U.S. carriers Enterprise (CV 6) and Hornet (CV 8) pursue the retreating Japanese fleet, sinking the heavy cruiser Mikuma and damaging the destroyer Mogami. The abandoned USS Yorktown (CV 5) is reboarded and salvage attempts begin. However, a successful torpedo attack by the Japanese submarine I-168 sinks the destroyer USS Hammann (DD 412) and forces the salvage party to leave Yorktown.
1944 - Allied forces land troops on Normandy beaches for the largest amphibious landing in history, Operation Overlord (D-Day), beginning the march eastward to defeat Germany.
1957 - Two F8U Crusaders and 2 A3D Skywarriors fly nonstop from USS Bon Homme Richard (CVA 31) off the coast of California to USS Saratoga (CVA 60) off the east coast of Florida. This is the first carrier-to-carrier transcontinential flight. The F8Us take 3 hours and 28 minutes and the A3Ds completed the crossing in 4 hours and 1 minute.
1987 - USS Antietam (CG 54) is commissioned at Baltimore, Md. The Ticonderoga-class guided-missile cruiser is named after the 1862 Battle of Antietam in Baltimore during the Civil War. The cruisers first homeport is Long Beach, Calif.
(Source: Naval History and Heritage Command, Communication and Outreach Division)