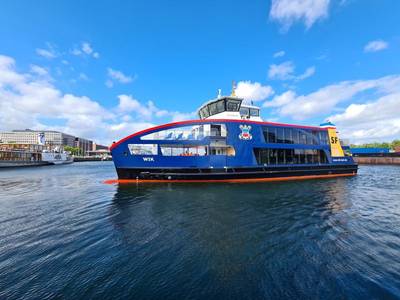 After the previous delivery of the hybrid ferry Gaarden in July 2020, Holland Shipyards Group was awarded a contract to build three additional similar hybrid vessels: Friedrichsort, Wik and Schilksee. With both the Friedrichsort and the Wik now in service in the Kieler Fjord, the Schilksee is scheduled to follow in the beginning of 2026.

The ferry measures 33.5 meters by 9 meters and is provided with a hybrid drivetrain that can be powered by either generators or by means of a battery system. The Wik is equipped with two electric propulsion motors with 255 kW each and a battery capacity of 273 kWh. The batteries will be charged overnight at a charging station.

With the new vessels, SFK is renewing its current fleet. The replacement of the fleet is in line with the environmental goals set by SFK and the city of Kiel. The city of Kiel aims to be CO₂ neutral by 2035  and expects shipping to play a major part in this shift.

The newly launched Maggie Cat, an Incat Crowther 31, will partner with Coolgaree Cat in a refreshed Sealink line-up operating out of Townsville.