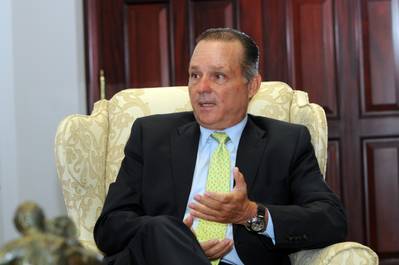 CEO of the Panama Canal Authority, Alberto Alemán Zubieta, will be awarded the Latin Trade BRAVO Business Award for Distinguished Service in the Hemisphere on October 28. With nine categories, including a Lifetime Achievement Award and Dynamic CEO of the Year, the BRAVO Business Awards are given to those playing a key role in improving Latin America’s economy, business and education. “I am humbled by this honor and I share this with the world-class workers of the Panama Canal who have worked with me for many years to bring to fruition our vision for our country and the region – the historic expansion of the Panama Canal. As we pursue new milestones, we hope to continue to be a game-changer in the trade industry.”

Under Mr. Aleman Zubieta´s leadership, the Panama Canal has begun an extensive project to expand its interoceanic passage to increase global trade. The expansion will double capacity as well as create a new lane of traffic along the Canal through the construction of a new set of locks. The Canal’s entrances at the Atlantic and Pacific channels will be widened and deepened as well.