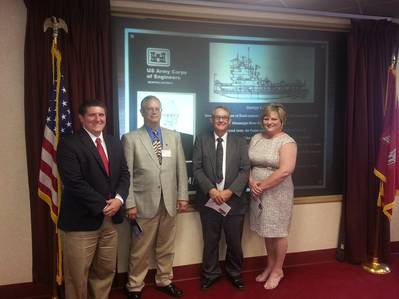 The motor vessel George C. Grugett was delivered August 9, 2013 by Horizon Shipbuilding, Inc. to the U.S. Army Corps of Engineers (USACE) in Memphis, Tenn. This is the second vessel in two years that Horizon has built for the Army Corps.

The USACE designated that Hull 776 be named George C. Grugett. The namesake of the vessel was the former Executive Assistant, Memphis District US Army Corps of Engineers. Mr. Grugett was a bomber pilot in World War II from 1943-1945 and then spent 35 years working for the Corps of Engineers. After retiring from the Corps, Mr. Grugett then served as the Executive Vice President of the Mississippi Valley Flood Control Association (MVFCA) where he served for an additional 30 years.

The vessel George C. Grugett will serve the Memphis District primarily to provide mobility and quarters for the buoy barge in support of reconnaissance missions. Additional operations will include pushing the loading unit (a 500’ x 150’ tow) and the grading unit (a 400’ x 100’ tow), and support of the revertment mission for the CEMVD. The vessel will be tasked with supporting the Huxtable flood control mission.

Delta Launch Services, the operating company for the Associated Branch pilots on the SW Pass of the Mississippi, has taken…