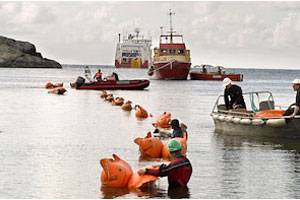 The 13-kilometre submarine cable to carry electricity from the Hywind floating wind turbine has now been installed and tested in the sea north-west of Stavanger.

Once generation starts, the power will come ashore in Røyrvika near Skudeneshavn on the island of Karmøy and be delivered to local grid operator Haugaland Kraft.

This pilot project, based on StatoilHydro’s own concept, ranks as the world’s first full-scale floating wind turbine. It arrived on location 10 kilometres from land in late June.

“We’ve worked this summer on mooring the floater to the three seabed anchor points as well as laying and testing the cable,” said Sjur Bratland, StatoilHydro’s venture manager for Hywind.

“It’s very satisfying that both these operations have now been completed with positive results.”

From the operational base at Skudeneshavn, the group has closely monitored the work carried out by contractors Nexans and Siemens to ensure safe and accurate execution, he reports.

The rotor blades, which are about 80 metres in diameter, were tested for the first time in July. Further testing will continue until the official opening on 8 September.

Plans call for the Hywind unit to start generating electricity in late September or early October, and for testing to continue over a two-year period.

The goal is to obtain information and data which can be used for continued development of the concept and to help reduce costs so that floating wind power can compete in the electricity market.