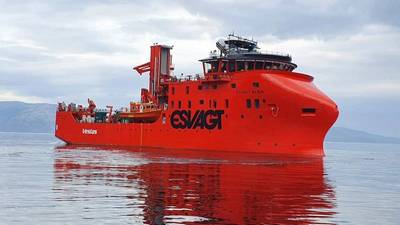 3i Infrastructure has agreed to acquire AMP Capital's stake in the Danish offshore vessel owner ESVAGT.

The deal will result in 3i Infrastructure owning a 100% of the equity in ESVAGT.

"This further investment is expected to be £268 million. Completion is subject to certain third  party consents and is expected to take place in the first quarter of 2022," 3i Infrastructure said.

Peter Lytzen, CEO of ESVAGT said: "ESVAGT has for a  while been subject to a strategic sales process undertaken by our owners 3i and AMP. The process has now been concluded and 3i has decided to buy AMP’s 50% share so ESVAGT in the future will be fully owned by 3i," Esvagt said.

"This decision is a testimony to the strong potential 3i see in ESVAGT and a  genuine trust in our organization, which we only can appreciate.  From a practical point it also means we can continue developing our company  “business as usual” and protect the strong ESVAGT values, which has been the foundation for our success since 1981. We wish 3i good luck as owners of ESVAGT and we will together show that the full investment into our company was a wise decision.

3i Infrastructure had previously said that a strategic review of its holding in ESVAGT was in progress and that as part of that review, offers had been invited.

However, the company retained the options of continuing to hold its 50% stake, to sell, or to offer to buy the AMP Capital stake.

"Binding offers for  100% of the equity were received but not at a compelling price for 3i  Infrastructure, and so the Company elected to offer to buy the AMP  Capital stake," 3i said Friday.

"ESVAGT is the market leader in the fast growing segment of service operation vessels (“SOV”) for the offshore wind industry. The company is also a leading provider of emergency rescue and response vessels (“ERRV”) and related services to the offshore energy industry in and around the North Sea and the Barents Sea," 3i said.

"Since acquiring ESVAGT in 2015, 3i Infrastructure and AMP have supported management in driving the company’s shift in strategic focus towards  SOVs and becoming a key enabler of offshore wind operations in Europe.  SOVs represented less than 10% of earnings at acquisition, but have grown to provide the majority of ESVAGT’s contracted earnings today," 3i added.

"During this period, ESVAGT has delivered six new SOVs, and has entered into a  joint venture with Crowley in the USA to support the emerging offshore wind energy market there. The offshore wind market, and hence the demand for SOVs, is expected to grow strongly over the coming years, as many  European governments and US states have set ambitious offshore wind build-out targets as part of their wider net-zero emissions plans," 3i said.

Richard Laing, Chair of 3i Infrastructure, said:"ESVAGT’s transition into a market leader in European offshore wind has been a  major achievement. We believe that it is well-placed to benefit from  continuing attractive growth prospects in the wind sector and we are  delighted to be acquiring 100% of the business.”

Phil White, Managing Partner and Head of Infrastructure, 3i Investments plc, Investment Manager of the Company, added: "We very much look forward to continuing to work with CEO Peter Lytzen and  the ESVAGT team to take advantage of the future growth of the offshore  wind market, both in Europe and the US.”