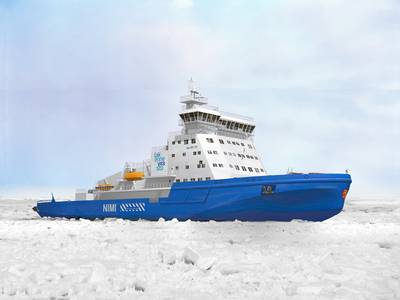 The new icebreaker built by Arctech Helsinki Shipyard for the Finnish Transport Agency and powered by Wärtsilä dual-fuel engines will be the most environmentally friendly icebreaker ever built.

A new icebreaker being built by Arctech Helsinki Shipyard for the Finnish Transport Agency will be powered by Wärtsilä dual-fuel engines capable of operating on both liquefied natural gas (LNG) and low sulphur diesel fuel. When launched in late 2015, it will be the first LNG-powered icebreaker in the world.

"The new icebreaker features the highest technology and will be built especially to operate in the demanding winter conditions of the northernmost Baltic Sea. By being able to use LNG fuel, the vessel will be the most environmentally friendly icebreaker ever built," says Esko Mustamäki, Managing Director of Arctech Helsinki Shipyard.

"We are the industry leaders in gas fuelled vessel equipment, and are proud to supply the world's first LNG powered icebreaker with engines powerful enough to meet the customer's requirements. The combination of ice breaking power and environmental sustainability is difficult to achieve, but our dual-fuel engine technology has the capabilities needed," says Aaron Bresnahan, Vice President, Sales, Wärtsilä Ship Power.

The vessel will be able to move continuously through 1.6 meter thick ice, and be capable of breaking a 25 meter wide channel in 1.2 meter thick ice at a speed of 6 knots. It will also be able to reach an average assistance speed of 9 to 11 knots and in open water the service speed will be a minimum of 16 knots. While the main purpose of the vessel is icebreaking, it will independently be able to perform oil spill response operations and emergency towing under demanding conditions both in winter and summer. The vessel will, therefore, operate all year round to ensure safe seaborne transports in the Baltic Sea.

In business since 1984 and weathering the various economic and market ups and downs over the last 40 years, Hillhouse Industrial Marine Inc.