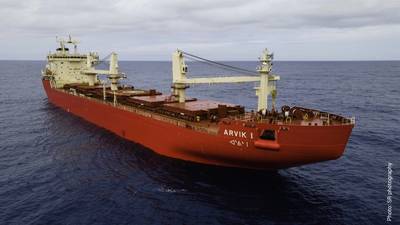 Ordered through Sumitomo Corporation and built by Japan Marine United Corporation (JMU) shipyards in Japan, the 31,000-DWT mine resupply vessel is a sister ship to Fednav’s two other Polar Class 4 icebreaking bulk carriers, Nunavik, delivered in 2014, and the Canadian-flagged Umiak I delivered in 2006, currently the most powerful icebreaking bulk carriers in the world.

Arvik I is equipped with IMO Tier III main and auxiliary engines and is compliant with the latest IMO nitrogen oxide (NOx) emissions regulations, Fednav said.

The Arctic made its final voyage in April and is being recycled in Turkey.