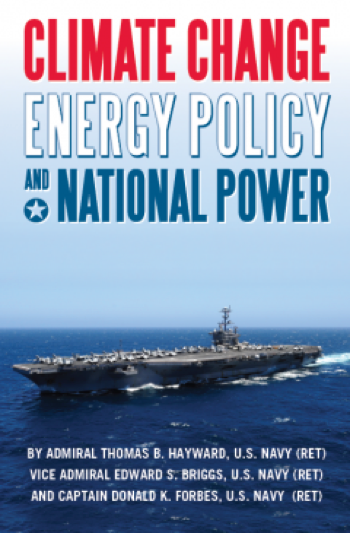 The United States government has pursued energy policies based on “the mistaken belief in the unproven science that claims carbon dioxide (CO2) emissions from burning of fossil fuels is the major cause of recent and future warming of the Earth,” write naval veterans Admiral Thomas B. Hayward, Vice Admiral Edward S. Briggs, and Captain Donald K. Forbes in a new report for The Heartland Institute.

Driven by that unproven science, our energy policies “adversely affect the exercise of national power and weaken the nation militarily at the very time the country is presented with the opportunity to become energy independent strategically,” they write.

In 'Climate Change, Energy Policy, and National Power', Hayward, Briggs, and Forbes call for the adoption of a balanced strategic energy policy that emphasizes the private sector and begins with fossil fuel extraction, production, and distribution “unfettered by excessive regulation, elimination of government subsidies to industry, and refinery expansion.”

They conclude, "U.S. government adherence to the IPCC’s work and the consequent actions taken in the public and private sectors inhibit the development and implementation of a balanced approach to energy production. In contrast to a sound national energy policy based upon genuine science and wise use of abundant and accessible natural resources, government intrusions into the energy sector have been counterproductive in favoring alternative fuels that to date are inherently inefficient. These policy intrusions suppress economic growth and debase our national security."

A copy of the report is available at: http://bit.ly/1nnJ3g9