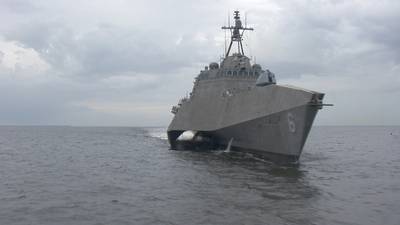 Shipbuilder Austal Limited announced it has delivered record revenue and record earnings for the year ended June 30, 2015, with Net Profit After Tax (NPAT) of $53.2 million, a 66.8 percent increase on FY2014.
Austal’s best result in its 27-year history was generated from revenue of $1.41 billion, a 26 percent increase on FY2014, achieved from multiple vessel programs, including major navy defense and patrol boat programs for the U.S. Navy, Australian Border Force (formerly Australian Customs and Border Protection), and the Royal Navy of Oman.
The financial result has enabled Austal’s Board of Directors to declare a fully franked final dividend of 3 cents per share, following the resumption of dividends earlier this year with a 1 cent per share interim dividend paid in March 2015.
Austal Chief Executive Officer Andrew Bellamy said the result reflected how Austal has evolved in recent years to have the capacity to deliver major defence vessel programs profitably as prime contractor.
“Austal reported record revenue and record earnings by delivering on major vessel programs across our three shipyards in the U.S.A., Australia and the Philippines,” Bellamy said.
“Austal performed well on our U.S. Joint High Speed Vessel contract, and we were able to generate strong earnings from our Australian operations through efficiency improvements on the Cape Class Patrol Boat program. This offset the anticipated margin pressure on Littoral Combat Ship 6, which was the result of the lack of design maturity on our first vessel as prime contractor.”
“We generated strong cash flow with $110.4 million in operating cash flow for the year, growing our cash holdings and underpinning the resumption and increase in dividends,” Bellamy continued.
“With LCS 6 now delivered, we are applying our experience from that vessel to the remaining nine ships being constructed under the $3.5 billion contract. We expect this to drive further efficiencies and margin growth, similar to the improvement in financial performance on the Joint High Speed Vessel and Cape Class Patrol Boat programs as those contracts matured.”