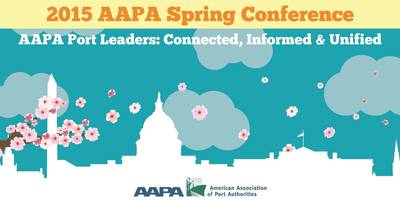 Port authority CEOs and senior staff from throughout the Western Hemisphere, along with maritime industry leaders, influencers and policymakers are expected to converge on Washington, D.C., April 20-21, to attend the 2015 Spring Conference of the American Association of Port Authorities (AAPA) – the collective and recognized voice of seaports in the Americas.

“We’re looking forward to a host of informative and provocative discussions at this year’s Spring Conference,” said AAPA President and CEO Kurt Nagle. “A particular focus will be on enhancing the land- and water-side connections with seaports. At a press conference we’re holding at 1:30 p.m. on April 21, we’ll detail the results of AAPA’s 2015 The State of Freight survey where we found striking evidence of need and government underinvestment in the crucial intermodal links that connect U.S. ports with the national freight transportation network.”

In a session earlier that day titled, “The Rising Economic Impacts of U.S. Seaports – New Findings,” economist Dr. John Martin, of Martin Associates, will present his firm’s latest findings on the jobs, personal income, tax revenues and overall economic value associated with the U.S. coastal seaports system. “It’s important to emphasize,” he notes in the report’s Executive Summary, “that the key growth in international cargo was (in exports), which increased 60 percent in value since 2007.” Dr. Martin goes on to say that seaports’ increasing contribution to the nation’s economy “underscores the need to invest in infrastructure and technology to support and foster continued economic contribution.”

Among the U.S. government leaders slated to speak are Cong. Alan Lowenthal (D-CA), who will discuss his new Economy in Motion freight infrastructure funding bill (H.R. 1308); Adm. Paul Zunkunft, Commandant of the U.S. Coast Guard, who will discuss cybersecurity risks at America’s seaports; Deputy U.S. Trade Representative Robert Holleyman, who will discuss U.S. trade facilitation efforts; U.S. EPA Administrator Gina McCarthy, will discuss how ports can create a sustainable environment; and U.S. Sen. David Vitter (R-LA), Transportation and Infrastructure Subcommittee chairman of the Senate Committee on Environment and Public Works, who was instrumental in helping pass the Water Resources Reform and Development Act in Congress last year and is being presented with one of two AAPA 2015 Port Person of the Year awards.

Serving as the Spring Conference’s April 20 luncheon speaker and the other 2015 Port Person of the Year awardee will be Lic. Guillermo Ruiz de Teresa, who is general coordinator of Mexican ports and Merchant Marine in México City. In this role, Mr. Ruiz de Teresa oversees a sector that will see a total port infrastructure investment of over 76,000 million pesos (about US$5 billion) by 2018.