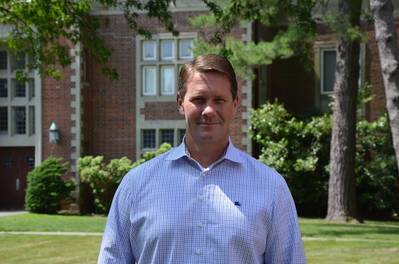 Webb Institute announced Michael T. Martin, PE as its new Assistant Professor of Electrical Engineering. Prof. Martin has over 23 years of experience as a marine electrical engineer with a broad background in electrical systems including, electrical propulsion, power generation, power distribution, lighting systems, communications, navigation and internal communication systems.
For the past five years, Prof. Martin has been the Vice President and principal engineer at Marine Design Dynamics, Inc. There, he was responsible for the daily operation and management of the New York office and supported company initiatives in marine energy conservation programs for the Military Sealift Command and the National Oceanographic and Atmospheric Administration (NOAA). As the principal engineer, he supported multiple programs for a variety of electrical generation and distribution system design and analysis.
Before his time at Marine Design Dynamics, Prof. Martin spent 19 years at AMSEC LLC, formally M. Rosenblatt & Son, first as a project manager and senior electrical engineer and worked his way up to senior principal and electrical section manager.
Prof. Martin’s most recent projects where he served as principal electrical engineer include, the new 5400 Passenger Class of the Staten Island Ferry, Maritime Services Vessel 2.0, Military Sealift Command Energy Conservation Program, and U.S. Marine Corps Energy Modeling and Automated Load Bank Prototype. Prof. Martin also has extensive experience with commercial (shore-side) technology and interfaces with marine based platforms.
Prof. Martin’s areas of research and professional interest include shipboard energy conservation and overall modeling of shipboard energy use, shipboard automation and communication systems.
During his career, Prof. Martin has presented multiple papers at the N.Y. Metropolitan section of SNAME. He holds a Bachelors of Electrical Engineering from Manhattan College. He received his M.S. in Electrical Engineering at the New York Institute of Technology. He is a licensed Professional Engineer in New York and New Jersey as well as a certified Energy Manager from the Association of Energy Engineers, and a certified Program Management Professional from the Program Management Institute.