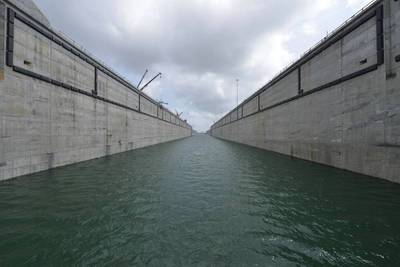 The seepage found in the Panama Canal’s third set of locks is said to be the result of an inadequate amount of steel reinforcement, the Panama Canal Authority (ACP) announced today.
ACP said it was informed by the contractor responsible for the design and construction of the locks, Grupo Unidos por el Canal, S.A. (GUPC), that the localized seepage found in the concrete sill between the lower and middle chamber of the canal’s expanded Pacific Locks was caused by insufficient steel reinforcement in the area under stress from condition testing.
GUPC also examined the other sills in both lock complexes, and found that in addition to reinforcing the faulty sill, they would also reinforce the first and second sill in the Cocoli Locks and the first three sills in the Atlantic-facing Agua Clara Locks, though these sills have not presented any issue.
Under its contract with ACP, GUPC is responsible for all corrections that may be required, as well as ensuring the long-term performance on all aspects of the locks’ construction.
Despite the setback, GUPC maintains that the expansion project’s completion date will remain April 2016, as planned.
ACP said it awaits formal confirmation from GUPC in the form of a comprehensive report which should also include the root cause of the detected filtrations.


Correction: Insufficient replaces inadequate in the headline to convey that the leaks are the result of the quantity of steel reinforcement in the locks, not the quality.