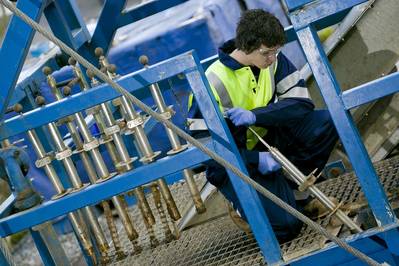 Aberdeenshire-based oilfield service company Romar International has awarded the contract of the management of its offshore workforce to Frontier International, an Aberdeen based international oil and gas recruitment company.

The personnel management contract, worth £650,000 in year one will require Frontier International to provide the management and logistics for up to 35 offshore operational personnel to support Romar’s North Sea and international operations.

Positions include offshore supervisors and operators for the Romar swarf handling systems. The need for an increased offshore workforce comes after a series of global contract wins in locations including Norway, Brunei and Australia.

Romar provides magnetic separation products and services to operators and drilling contractors globally. The products remove swarf waste, which has been produced from downhole operations.

Robbie Gray, commercial director of Romar International, said: “Off the back of a number of contract wins we have seen significant business growth worldwide and we require personnel to fulfil these large jobs. This is hugely positive for the company as we look to drive growth in new regions.

“Frontier will be managing the offshore workforce on our behalf which includes all the logistics for operational personnel including visa applications for international operations.”

Paul Radcliffe, managing director of Frontier International, said: “We look forward to successfully working with Romar, and securing this lucrative contract is really positive for both parties. Our extensive experience in this sector will allow us to manage and provide high calibre employees to Romar.”

Since 2001 the Romar has grown in size and currently provides products in many oilfield industry provinces including the U.K. and Norwegian North Sea, West Africa, Gulf of Mexico, and South America. Its success is reinforced by its ability to set up strategic partnerships in regions where Romar’s products will be well utilize.