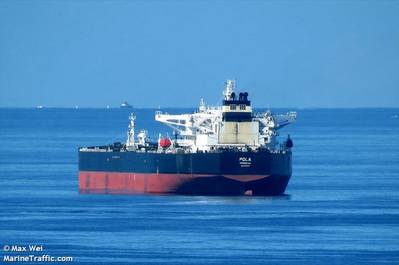 The ship with the mine on the hull has been identified as the Liberia-flagged Pola, and is owned by Dynacom Tankers. Image Credit: Max Wei

A mine that was attached to the hull of an Iraqi oil tanker was defused two days after it was discovered, Iraq's military said in a statement on Saturday.

The tanker was in international waters about 28 nautical miles (52 km) off Iraq's coast in the Gulf and supplying another ship with fuel when the device was discovered on Thursday afternoon.

An investigation has been opened to find out the circumstances of the incident.

The military said on Friday that it was not immediately clear how the mine was attached to the tanker, which was being rented by an unidentified client from Iraq's state oil marketing organization.