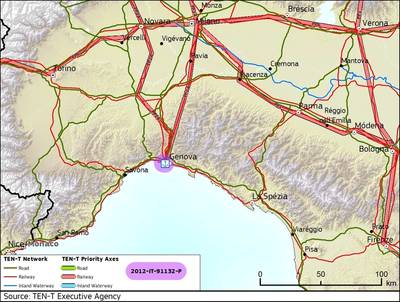 The European Union will co-finance with €3.9 million from the TEN-T Programme a project to extend one of the terminals and renew the intermodal infrastructure of the northern Italian Port of Genoa.

The project, which was selected for funding under the 2012 TEN-T Annual Call, concerns works aimed at adapting the Port’s infrastructure to larger ships. The Port of Genoa, as a major national port and southern European gateway, needs to be prepared for the future traffic demand increase and to adapt its port layout to the new market requirements.

The project will tackle land reclamation of the sea basin between the Canepa and Ronco piers and the building up and revamping of infrastructures ancillary to the new terminal, particularly a new rail connection. The overall aim is to create a new multipurpose terminal, built and equipped with higher technical and operational standards.

Once completed, this project will remove a major bottleneck and improve modal split, as well as contribute to the achievement of a number of fundamental EU transport policy objectives.

The project will be monitored by the Innovation and Networks Executive Agency (INEA) and is set to be completed by the end of 2015.