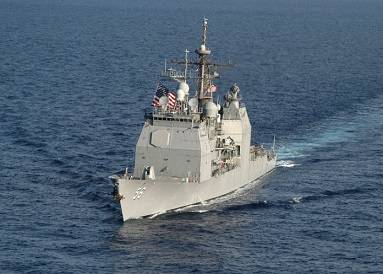 San Jacinto was transiting the Mediterranean Sea conducting routine communications shortly before 11 p.m. local time Aug. 3, when it was hailed by the Turkish warship who requested transportation assistance for a mariner who required immediate medical attention.

"Helping another mariner at sea is fundamental to our profession," said Capt. Bill McKinley, San Jacinto's commanding officer. "My watch team received the call at more than 130 nautical miles away which is at extreme range for bridge to bridge communications. The watch team immediately made best speed to the position of the Turkish ship while making all the complex arrangements for the medical evaluation."

"We provided guidance on how to stabilize the patient until San Jacinto could safely transport the sailor to the nearest military medical facility," said Cmdr. William Mann, senior medical officer, Harry S. Truman.

Early in the morning Aug. 4, a rigid-hulled inflatable boat (RHIB) from San Jacinto transported the mariner from Cezayiril Gazi Hasan Pasa to San Jacinto where a helicopter was standing by to transport him to U.S. Naval Hospital Sigonella, Italy, for medical attention.

The patient is in stable condition at the facility.

McKinley praised his crew for their efforts along with those of the staff aboard Harry S. Truman.

"They performed flawlessly as did the Harry S. Truman Strike Group staff," he said. This operation once again proves the outstanding flexibility of Sailors and the United States Navy."

"The crew of San Jacinto did a fantastic job," said Rear Adm. Kevin Sweeney, commander, Harry S. Truman Carrier Strike Group (HST CSG). "They did everything right, from getting their RHIB in the water and over to the Turkish ship to getting the patient back on board, onto a helicopter and to the hospital for medical attention. San Jacinto was in the right place at the right time and it made a real difference for that individual. Additionally, I was very impressed with the professionalism of the crew of TCG Cezayirli Gazi Hasan Pasa."