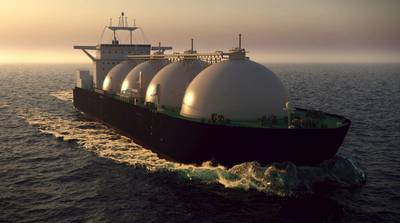 Prices for spot liquefied natural gas (LNG) cargoes imported into Japan, the world's biggest buyer of the fuel, fell in April to their lowest since the country's trade ministry started compiling data in 2014.

The latest low for LNG cargoes into Japan - reflecting actual prices paid rather than those derived from surveys or indices - highlights the evisceration of demand for gas, along with other commodities, brought about by the coronavirus pandemic.

The outbreak has turned markets on their heads, with U.S. oil prices slipping into negative territory during April and in Japan, electricity prices effectively hitting zero on regular occasions as industrial activity has slowed.

The average contract price for spot LNG cargoes shipped to Japan in April fell to $2.40 per million British thermal units (mmBtu), according to data released by the Ministry of Economy, Trade and Industry (METI) on Thursday.

That was the lowest since the METI started publishing the data in March 2014 and was down from $3.40/mmBtu in March. Asian spot LNG prices fell to a record low of below $2/mmBtu earlier this month, with buyers in Asia and Europe canceling cargoes from the United States, usually the cheapest source for gas to turn into LNG before shipping costs.

While some countries are starting to ease lockdowns put in place on billions of people, secondary outbreaks in South Korea and China have raised fears that the pandemic will be protracted, putting further pressure on commodity prices.

METI surveys spot LNG cargoes bought by Japanese utilities and other importers but excludes cargo-by-cargo deals linked to benchmarks such as the U.S. natural gas Henry Hub index. It only publishes a price if there is a minimum of two eligible cargoes reported by buyers.