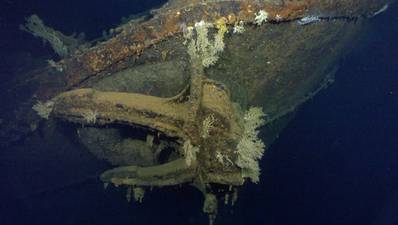 Bluefin Robotics underwater robot helps locate historic sunken Japanese battleship Musashi; located by philanthropist and entrepreneur Paul G. Allen, aided by advanced undersea technology
Bluefin Robotics underwater autonomous vehicles (AUV) scour the ocean floors around the world looking for items critical to the defense industry, oceanographic researchers and the oil and gas industry. Most recently, a Bluefin vehicle was used by Paul G. Allen and his team of researchers in their search for the sunken Japanese battleship Musashi, the largest battleship in naval history. Allen and his crew used various methods to narrow down the elusive location of the wreck, and when they were close—sent the Bluefin 12 down to do its job. After only three dives, the underwater robot located the shipwreck in the Sibuyan Sea.
“We’re proud that our vehicle was able to assist so effectively in this important search for an historic naval vessel,” said Bluefin Robotics interim CEO Rich Leonard,   “and we look forward to supporting Mr. Allen’s passion in future searches for undersea artifacts.”
Commissioned in 1942, the Musashi weighed in at 73,000 tons fully loaded. It featured 18-inch armor plating and was armed with nine 18-inch guns, the largest ever mounted on a warship. Utmost secrecy was maintained by the shipyard in Nagasaki during the construction; the entire length of the ship was hidden from view to prevent the Allied Forces from learning of her construction. Active in several battles, including the Battle of the Philippine Sea, the Musashi was eventually sunk by an estimated 19 torpedoes and 17 bombs on October 24, 1944 in the lead up to the Battle of Leyte Gulf.  Of Musashi’s 2,399 crew members, nearly half lost their lives including the Commander Vice Admiral Toshihira Inoguchi. Even today, the Musashi and her sister ship, the Yamato, are considered to be unparalleled feats of naval design and construction.
Allen and his research team are mindful of the responsibility related to the wreckage of the Musashi as a war grave and intend to work with the Japanese and Philippine governments to ensure the site is treated respectfully and in accordance with applicable traditions.
M/Y Octopus is regularly used for exploration projects, scientific research initiatives and rescue missions. In 2012, Allen and the Octopus underwater teams participated in the exploration of the wreck of the HMS Hood, in conjunction with the British Navy.