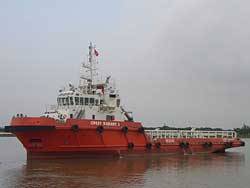 Pacific Crest, the vessel owning subsidiary of Singapore based Pacific Radiance, will soon take delivery of the third in a series of 53-meter towing and supply vessels from Jiangmen Shipyard on the Pearl River in Guangdong Province China.

Founded in 1954 the shipyard was purchased by the private Guangdong TianJian Group in 1997. Enjoying an extensive area with covered build locations including covered graving docks the yard is capable of building an impressive array of vessels at once.

In late October 2008 the yard had a ship-docking tug, two or three 40-meter ocean towing vessels, a Robert Allan-designed escort vessel and a small tanker in addition to the 53-meter towing supply vessel nearing completion for Pacific Crest.

Fitting out alongside at the shipyard, the orange-hulled vessel displayed a 3x1.2-meter stern roller, deck mounted sharks jaws, a bow thruster and a substantial double drum waterfall-towing winch from ME Winch of Singapore.

A pair of Cummins KTA50 main engines powers each of the three vessels. Each of the 16-cyliner 50-liter engines generates 1600 horsepower at 1800 RPM and turns into Reintjes marine gears.

The first two vessels, Crest Radiant 1 and 2, will be followed into service by the Crest Radiant 3, due to undergo sea trials in November.