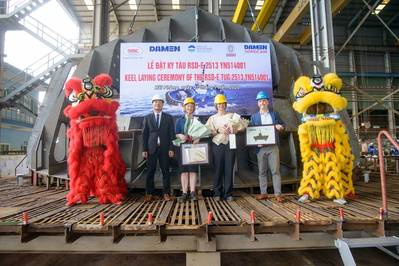 In Vietnam, Damen Song Cam Shipyard, together with joint venture partner Song Cam Shipyard hosted a keel-laying ceremony Tuesday for the electric RSD-E Tug 2513 that Damen is building for the Ports of Auckland, New Zealand.

A fully electric version of Damen’s standard RSD Tug 2513, the new RSD-E Tug 2513 is the world’s first fully electric tug with 70 metric tons bollard pull. It will contribute toward meeting Ports of Auckland’s goal of being a zero emissions operation by 2040. With 80% of electricity in the country already cleanly generated, the tug will complete a green energy cycle in the ports.

The new tug will be named Sparky following a popular vote in which people were invited to select a name for the vessel. More than half of the 8,000 people who participated in the election voted for the name.

In addition to the RSD-E Tug 2513, the Damen Shipyards Group recently built and delivered fully electric ferries to Denmark, electric and hybrid ferries to Canada and an electric cutter suction dredger.