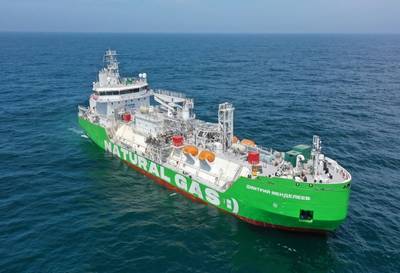 Designed and built by Keppel O&M, the 5,800m3 ice-class LNG bunkering vessel (LBV) Dmitry Mendeleev was delivered to Shturman Koshelev. When the vessel was ordered back in 2019, it was said that it would, once delivered, be chartered by Gazprom Neft for Baltic Sea operations.

The LNG bunkering vessel is the fourth newbuild LBV by Keppel O&M and was built at its Keppel Nantong Shipyard in China to Keppel’s proprietary MTD 5800V LNG design.

The vessel is compliant to the Arc 4 and Ice Class 1A notations from the Russian Maritime Register of Shipping and Bureau Veritas respectively, and its hull is optimized for independent ice navigation in medium first-year summer ice of up to 90cm thickness.

Measuring 100m in length and 19m in width, the vessel is also equipped with an integrated digital system that allows it to be managed by only one person from the navigation bridge.

The LNG-bunkering vessel was named in honor of the Russian chemist and researcher Dmitry Mendeleev who invented the periodic table of elements.