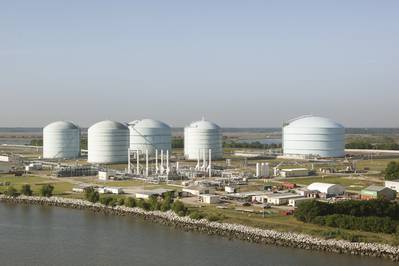 Kinder Morgan expects to bring the remaining nine units of its liquefied natural gas (LNG) export facility at Elba Island into service by the first half of next year, Chief Executive Officer Steven Kean said on Wednesday.

The Houston pipeline operator plans to bring three more into service this year, with another six to start up in the first half of 2020, Kean told investors on an earnings call.

The facility has experienced periodic delays since late last year, which had been "a drag on our financial performance," Kean said. The company expects to end 2019 with adjusted pre-tax earnings 3% below its budget, with the delays contributing to the variance, Chief Financial Officer David Michaels said.

In Texas, commercial activity to develop a 2 billion cubic feet per day (bcfd) natural gas pipeline project in the Permian Basin, the largest U.S. oil field, has slowed, because of "some producer retrenchment in their Permian activities," Kean said.

"We believe the pipeline is needed, but it may not be needed quite as soon as we were expecting 3 months ago," he said.

The company brought its Gulf Coast Express pipeline, of the same size, into service last month, slightly ahead of schedule. The Permian Basin has long needed additional gas takeaway capacity as output overwhelmed pipeline space needed to transport the gas out the region, in West Texas and New Mexico.

Three other gas pipeline projects with capacity of 2 bcfd are slated to come online from 2019 to 2021, and the Permian Pass pipeline "may not be needed in 2022," Kean said.