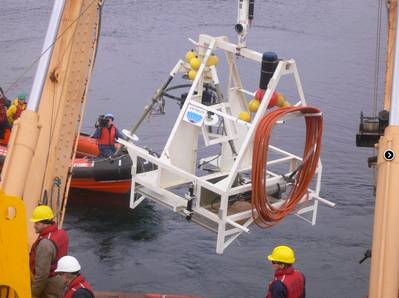 OceanWorks International announce the successful re-deployment of the VENUS coastal network in the Strait of Georgia after repairs.

Placed in Canadian waters in the Strait of Georgia, VENUS is part of the Ocean Networks Canada Observatory, is a cabled undersea laboratory with nodes that provide live video, acoustic images and real-time data for ocean researchers and explorers. VENUS delivers real time information from seafloor instruments via fiber optic cables to the University of Victoria, BC.

In response to the failure of a power connector on the VENUS array in early fall 2012, a joint team of engineers from OceanWorks International (OWI) and Ocean Networks Canada (ONC) spent a week aboard the vessel CS Wave Venture recovering, repairing, testing and re-deploying the network.

“Faced with a demanding repair timeline, OceanWorks engineers developed a creative solution that enabled the Node Pod to be redeployed on time."  Adrian Round, ONC’s Director, Observatory Operations said: “As part of the repair, they also worked at sea to install upgraded Node Junction Cans which will significantly extend the life of the VENUS Strait of Georgia Array.”

The marine operation was a challenging procedure for the cable ship but proceeded smoothly without any major complications.

OceanWorks International is an internationally recognized subsea technology company specializing in the design and manufacture of manned abd unmanned subsea systems and specialized equipment for military, oil and gas, scientific, and other marine markets.