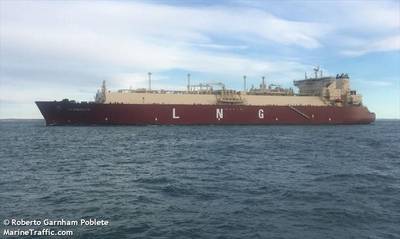 A liquefied natural gas (LNG) tanker which loaded a cargo from the United States is currently heading to China, the first shipment since March 2019, according to shiptracking data from Refinitiv Eikon and Kpler on Monday.

The tanker SK Resolute loaded the cargo from the Cameron LNG terminal on March 22 and was originally headed to Cristobal, Panama, according to shiptracking data from Refinitiv Eikon and data intelligence firm Kpler.

It changed its destination to Tianjin in China on March 28 and is expected to arrive at the Chinese port on April 28, the data showed.

"It's heading to Tianjin, but taking a further route via the Cape of Good Hope which takes around 38 days compared with via the Panama Canal which takes around 25 days," said Rebecca Chia, an analyst at Kpler, adding that there is still potential for the tanker to divert.

If this shipment arrives in China, it would be the first since China raised tariffs on LNG imports from United States to 25% last year. Tankers are sometimes rerouted while in transit and it is not clear if this ship's destination might be changed.

China announced last month that it would grant exemptions on retaliatory duties imposed against 696 U.S. goods after both sides reached a phase 1 trade deal which took effect on February 14. Firms were supposed to submit their applications on March 2 and exemptions granted will be valid for one year.