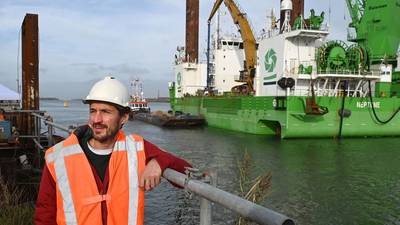 Large vessels are required to have extra tug assistance due to tunnel construction work in the Scheur, the Port of Rotterdam Authority said.

From November 12, seagoing vessels exceeding 140 meters long have requires a tugboat on the Scheur between Maassluis and Rozenburg during a three-hour window of strong tides.

The harbor master of the Port of Rotterdam Authority took this measure to ensure safe passage while the crane vessel Neptune has been positioned in the middle of the Scheur due to the construction of the Maasdelta tunnel. As a result, the passageway is narrow. Moreover, the excavation of the tunnel trench created a nuisance transverse current. The measure is expected to last until the end of the month.

Ship traffic between kilometer posts 1015 and 1018 – involving several dozen sea-going vessels and a few hundred inland vessels every day – have been asked to take extra care, moderate speed and follow instructions from the Port of Rotterdam Authority’s traffic controllers. "We are now entering the most exciting phase of the construction of the Maasdelta," said Pieter Nordbeck (Port Authority). "All shipping must be regulated to allow safe and smooth passage of the Neptune, which has been firmly fixed to the riverbed by means of legs."

The Rotterdam Traffic Center in Botlek, which regulates vessel traffic, will maintain consultation with the Neptune’s captain, traffic controllers and those on board. The contractor has an escort vessel on standby to warn shipping and a tugboat in case any assistance is required.

"The jack-up has four different center positions. This creates a short passing route and a long passing route. Inland vessels could still pass along the short passing route," Nordbeck said. "For sea-going vessels, this was not possible. So when the jack-up is positioned in the south of the middle, shipping is only allowed to pass on the north side. During that time, meetings will be prohibited for sea-going vessels while overtaking will be prohibited for all shipping. Overtaking means passing another vessel.’"

This operation involves laying tiles weighing 100,000 kilos each. They serve as temporary foundations for the tunnel sections of the Maasdelta tunnel. Once the tiles are in place, a diver will conduct an inspection. From the moment the diver submerges, which will last somewhere between 15 and 20 minutes, the Scheur will be fully closed for shipping.

The tunnel is expected to be completed by 2024.

Global Port Services, owned by Global Energy Group alongside the Port of Nigg, has said it has secured multiple contracts…