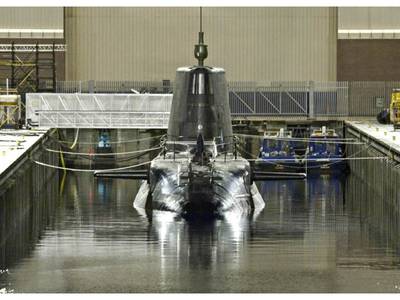 'Ambush', the second of the Royal Navy's Astute-Class attack submarines prepares to leave the builder's yard.

In the next few days, the 7,400-tonne submarine will leave the BAE Systems shipyard in Barrow-in-Furness in Cumbria, where she was built, and sail to Her Majesty's Naval Base Clyde in Scotland.

The seven Astute Class boats planned for the Royal Navy are the most advanced and powerful attack submarines Britain has ever sent to sea.

They feature the latest nuclear-powered technology, which means they never need to be refuelled and can circumnavigate the world submerged, manufacturing the crew's oxygen from seawater as they go.

Minister for Defence Equipment, Support and Technology Philip Dunne said after viewing the submarine, touring the shipyard and meeting the workforce:
"This is my first visit to one of the UK's most advanced defence industries, and I am hugely impressed with what I have seen at Barrow-in-Furness. Ambush is a very sophisticated and potent vessel and I look forward to her departure from the shipyard here for the sea trials that will prepare her for her planned entry into service with the Royal Navy next year.

The boat's Commanding Officer, Commander Peter Green, said:
"We are grateful to all the people who have worked hard to construct this vessel. The crew cannot wait to start sea trials and take this magnificent vessel a step closer to beginning operations."