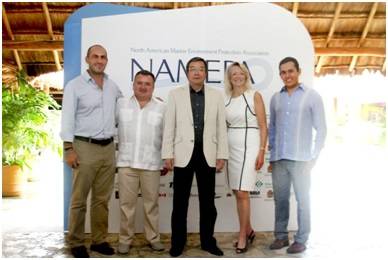 The conference was held in Cozumel, and featured a marine debris education session at a local high school, as well as the full participation of International Maritime Organization (IMO) Secretary-General Koji Sekimizu; Sylvain Lachance who is Transport Canada’s Acting Director General for Maritime Safety & Security; and RADM Paul Thomas, the Assistant Commandant for Prevention Policy at the United States Coast Guard.

The conference was officially opened by Roberto Borge Angulo, the Governor of the State of Quintana Roo and FredyMarrufo Martin, the Mayor of Cozumel Their words of commitment to the marine environment and to the purpose of the conference were greatly appreciated by the international delegates attending the event.

The conference covered Annex 1:  Ending Oily Water Separator Violations, waste reception facilities, Education and welfare of future mariners, a heated debate about whether Mexico should become an Emission Control Area, a riveting panel on safety and an overview of green ports.  The luncheon keynote speaker was Jorge Duran, Chief of the Secretariat for the Organization of American States’ Committee on International Ports.

The conference was held on the 7th anniversary of the birth of NAMEPA on the occasion of the North American World Maritime Day in New York.  Since then, the event has rotated between Canada and the United States.

“It is fitting that NAMEPA Mexico should be born on the anniversary of NAMEPA,” stated NAMEPA Co-Founder and Executive Director Carleen Lyden-Kluss.  “Now with the creation of the NAMEPA Mexico chapter, we are truly North American.”

“We are pleased by the instant response from industry to the formation of NAMEPA Mexico,” observed Stericycle’s Fernando Melo Graf.  “Groupo Mexico has already signed on, as has Mammoet and others.  We intend to issue a call for members shortly and begin the important work to ‘Save our Seas.’”

Next year’s North American World Maritime Day will be held October 5-7 at MITAGS in Maryland where the theme will be “Maritime Education and Training.”