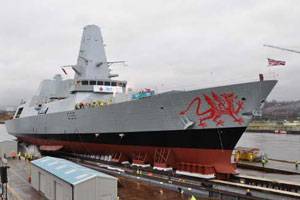 The Royal Navy’s latest addition to the Type 45 destroyer fleet, to be called HMS Dragon, pulled into the Clyde from BVT’s shipyard at Govan on Nov. 17, 2008.

As well as providing air defense over a wide area, including for the future aircraft carriers, the Type 45s will be able to conduct a variety of operations. They will be able to carry up to sixty Royal Marines Commandos and their equipment and operate a Chinook sized helicopter from the flight deck.

Minister of State for Defence Equipment and Support, Quentin Davies said:
“I am delighted to be here today to witness the launch of our latest destroyer Dragon. She is a fine example of the UK’s shipbuilding prowess and will boost the Royal Navy’s capability when she enters service in 2012. These are exciting times for shipbuilding here in the UK and today’s launch marks another milestone in the T45 programme. Work for the Type 45 Destroyers and the Future Aircraft Carriers is sustaining thousands of jobs, not just here in Scotland but across the country. I look forward to watching Dragon’s progress as she undergoes her sea trials next year.”

Admiral Sir Mark Stanhope, Commander in Chief Fleet, said:
“The launch of Dragon is another important landmark in delivering future Royal Navy capability.  We are in the middle of the largest procurement programme for the Royal Navy in many years and today’s event underlines the importance of the Royal Navy in the 21st Century. The Type 45 destroyers will be powerful and versatile ships, capable of undertaking a wide range of military tasks. They are based on first-class innovation and engineering which will set new standards in air defence and they will ensure that the Royal Navy remains at the forefront of the world’s navies.”

Complete with the latest upgrade to satellite communications systems, the destroyer will carry the PAAMS system (Principal Anti-Air Missile System) allowing it to defend high value ships from the most dangerous air threats, including multiple attacks by sophisticated anti-ship missiles.

Speaking after the launch, Alan Johnston CBE, CEO of BVT Surface Fleet said:
“The launch of Dragon is an excellent opportunity to celebrate the progress that is being made on this programme here on the Clyde and I am delighted that so many people have turned out to share this occasion with us.Only four days ago, the second ship in the class, Dauntless, departed the Clyde on her maiden voyage, her first set of sea trials off the west coast of Scotland, and today we have seen their magnificent sister ship take to the water for the first time. Each of these milestones on the Type 45 contract is testament to the innovation, design and engineering skills of our employees and partners and proof of our commitment to building the next generation of warships for the Royal Navy.”

Dragon was named and launched by her Lady Sponsor, Mrs. Susie Boissier, in front of several thousand members of the public, including over two thousand school children wearing dragon masks.