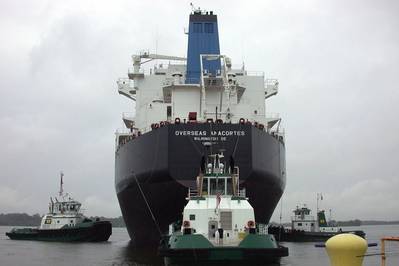 On July 10, Aker Philadelphia Shipyard launched Ship 014, the tenth product tanker in a series of 12 to be completed in 2011. The 46,000 dwt vessel was floated off of its blocks and was transferred by tug from the Building Dock to the Outfitting Dock, where it will remain for the next few weeks as it undergoes continuous testing and commissioning in preparation for its upcoming sea trials.

When completed, the 600 ft long vessel, to be named the Overseas Anacortes, will be sold to American Shipping Company and bareboat chartered to OSG America for use transporting petroleum products. The vessel is scheduled to be completed in the third quarter of 2010 and will join its nine sister ships in transporting petroleum products for the Jones Act.