Lakes Limestone Trade Up More Than 6% in September 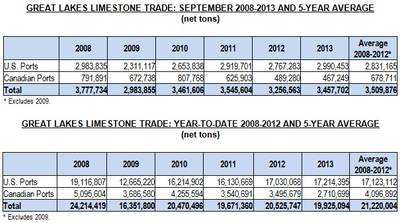 Shipments of limestone on the Great Lakes totaled 3.5 million tons in September, an increase of 6.2% compared to a year ago. The September total was, however, 4.9% below August’s tally.

Shipments from U.S. ports totaled 3 million tons, an increase of 8.1% compared to a year ago. Loadings at Canadian quarries – 467,000 tons – dipped by the equivalent of one cargo in a 767-foot-long laker.

Year-to-date the Lakes limestone trade stands at 19.9 million tons, a decrease of 2.9% compared to a year ago, and 6% below the long-term average for the first three quarters.