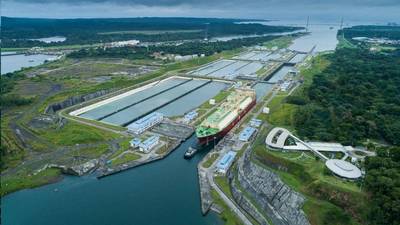 Congestion delaying LNG shipments via the Panama Canal is expected to last through the peak demand winter months, traders close to the situation said, although the canal's regulator said it had made changes to speed up transit.

The price of liquefied natural gas (LNG) and shipping rates have hit record highs because of the bottleneck, supply constraints and heavy demand from Asia, where freezing weather has placed the energy supply system under strain.

Ships carrying LNG from the United States to meet the Asian demand waited for up to two weeks in December to navigate the canal. The authority told Reuters by email the wait had halved to one week.

It said it had changed its transit reservation system on Jan. 4 to reduce the logjam and allow LNG vessels to reserve two slots 80 to 15 days ahead of transit, rather than just one.

The authority has also introduced auctions to sell off any slot that becomes available within two to three days before transit due to last-minute cancellations.

So far, five auctions have been conducted and four slots have been awarded to LNG vessels, the authority said.

Analysts and traders say they still expect congestion until March, when northern hemisphere temperatures rise and heating demand eases as there is a shortage of slots.

"Currently, there are only two slots available for LNG. Ideally, there would be a lot more than that," says Ross Wyeno, lead LNG analyst for the Americas at S&P Global Platts.

Traders have cancelled some LNG tenders because of the delays, but there are too many vessels for the three sets of locks that lift and lower vessels carrying all kinds of products through the 80 kilometre canal that spans the narrowest part of Panama and connects the Atlantic and Pacific Oceans.

The spike in prices and demand is the culmination of a deeper trend as China, India and other Asian nations have bought LNG as part of efforts to diversify from highly-polluting coal.

Over the last nine months, spot LNG prices have risen more than ten-fold from an historical low in April of $2 per million British thermal units (mmBtu) to more than $28 per mmBtu this week.

A trip to Asia through the canal Reuters takes 15 days.

Alternatively, U.S. exporters that have been ramping up LNG supplies to meet the high demand, can send their cargoes round the Cape of Good Hope, South Africa.

That more than doubles the time of the journey to Asia to around 38 days and is a route LNG vessels usually avoid.

Energy Aspects research firm said around one third of LNG vessels loading from the United States took the long route in December.