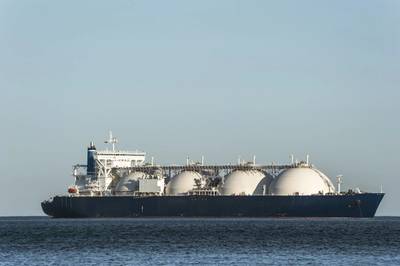 More than half a dozen liquefied natural gas (LNG) tankers were waiting to enter U.S. export plants in the Gulf of Mexico as Hurricane Delta marches toward the Gulf Coast.

Most tankers were located outside of Cheniere Energy Inc’s Sabine Pass and Cameron LNG’s Cameron plants in Louisiana, according to data from Refinitiv. There were also a few outside of Freeport LNG’s Freeport plant in Texas.

Delta is expected to slam into central Louisiana as a major hurricane on Friday, putting the storm closer to Cameron than Sabine. Both plants are located in southwest Louisiana.

Traders noted it was unlikely any vessel would enter Sabine or Cameron before Delta makes landfall. LNG tankers, like all vessels, tend to steer clear of storms.

There are two tankers currently loading at Sabine: Pearl LNG and Torben Spirit. Traders expect both to leave before the storm hits.

The last big storm to hit Louisiana was Hurricane Laura in late August. Sabine and Cameron both shut ahead of Laura. Sabine shut by August 25 and started returning around September 3.

Cameron shut around August 26 but did not start to return until September 27 after Entergy Corp, the local electric company, restored power, and did not see its first vessel until October 4 after the U.S. Army Corps of Engineers cleared the ship channel connecting the plant to the Gulf of Mexico.

The amount of gas flowing to all U.S. LNG export plants averaged 7.2 billion cubic feet per day (bcfd) so far in October, up from 5.7 bcfd in September.

That would be the most in a month since April as rising gas prices in Europe and Asia have prompted buyers to reverse earlier cargo cancellations in recent months.