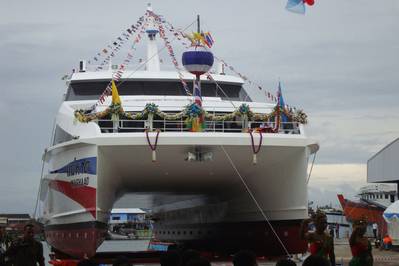 Maehaad is the sixth vessel designed by Incat Crowther for Lomprayah High Speed Ferries, and follows on from the 29m catamaran ferries Thongslah and Koh Prab. The success of these two vessels has led to a growth in Lomprayah’s operation.

Maehaad builds on the performance and efficiency of the earlier vessels, with a new-generation plum stem hull form delivering excellent fuel economy and seakeeping and a very low cost per passenger mile.

Passengers board the vessel through bulwark gates on both decks. The main deck has a large luggage area aft, as well as five toilet spaces. There is a large kiosk and bar amidships, whilst a second luggage area is provided at the forward end of the main cabin. The deck has capacity for accommodating 233 passengers.

The upper deck cabin is split between has a mix of economy class seats and VIP seats in a separate rooms. Outdoor seats are provided on the aft upper deck, whilst there are also seats on the roof deck.

A pair of MTU 16V2000 M72 main engines, each producing 1,440kW, were selected for the vessel, extending engine life and increasing maintenance intervals. At the vessel’s service speed of 25 knots, the engine operates below 65% MCR in a fully loaded condition. The vessel can reach speeds in excess of 32 knots.

Incat Crowther was contracted to deliver a full production design package for the project. This approach improves build efficiency and reduces material wastage. The package consisted of all major structure, including nested and cut aluminum, as well as major fitout components such as exhaust and air conditioning. The package also includes three-dimensional structure and systems design, which detail all piping runs and components.