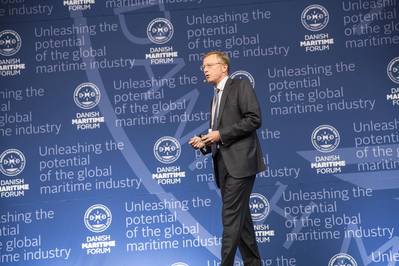 AP Moller-Maersk CEO, Nils Andersen, delivered the keynote at today’s Danish Maritime Days forum in Copenhagen where he offered several keys to enhancing the maritime sector on a worldwide scale.
Andersen called the ship purchasing market attractive for investors, but said the industry is relatively unattractive when comparing its returns to those of other global markets.
Though Maersk expects container volume growth near 4.5% per year, Andersen explained that these figures will not be achieved by adding ships to an already overcrowded market. Andersen instead suggested that shipowners consider ordering fewer ships, citing the market’s overcapacity, overfunding and under- scrapping as reasons to forgo purchasing on speculation.
Andersen explained that Maersk tends to purchase vessels only when needed and as late as possible to avoid sitting with ships that are not in use as they potentially depreciate in value. Maersk’s policy is to examine specific market needs and then invest in ships and technology accordingly. “There’s still a lot of room in the industry for innovation,” Andersen said, adding, “We think of innovation in ways that can enhance profitability.”
Andersen referenced an example of this tactic earlier in his keynote when mentioning the company’s ambition to develop new reefer container technology to ship roses from Kenya, which currently stands as one of the cargo’s largest exporters globally. Due to technological restrictions, rose are only exported from Kenya by plane, which is very costly and environmentally inefficient. According to Andersen, containerships hold the potential to cut export costs by 50-70 percent while reducing CO2 emissions by 90 percent.