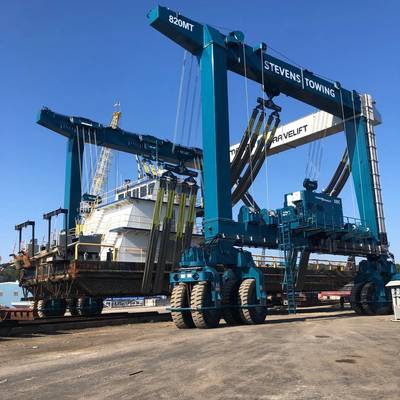 Founded in the late 1800s as Stevens Brothers with a single boat, Joseph Stanyarne Stevens and William Yates Stevens transported produce and supplies from Edisto Island to Charleston and many points in between. The company has remained in the Stevens family and has continuously grown to meet market demands.

“We hope to meet the needs of the dry docking for ship docking tugs in the southeast, as well as passenger boats. Schedules are tight and customers are struggling to get into bigger yards – which makes it difficult to keep up with the demands of vessel schedules. We hope to shorten the dry dock time frame for them,” said Johnson Stevens, President, Stevens Towing

Customizations
All Wheel Electronic Steering is a standard feature on the 820CII model, allowing maximum maneuverability and making it incredibly nimble for such a large machine. This 820CII is also customized with additional Hydraulic Sling Adjustment for maximum versatility. The additional sling adjust option will allow crews at Stevens Towing to haul vessels with a wide range of hull designs and configurations – including the barges and tugs in their own fleet.

In addition, the engine compartment and operator’s station were relocated to the top of the lower side beam in order to allow crews to drive a forklift underneath for easier blocking and to protect the machine’s vital components from storm tidal surges.

An LED light package was installed for operator safety in low light conditions or inclement weather. A Cold Start Package and Automatic Variable Throttle Fuel Saver were also included on this machine for longevity and cost savings on maintenance and fuel consumption.

Impact
Stevens Towing representatives expect that the addition of this 820CII to their shipyard facility will create better availability for customers in need of services and repairs on their vessels by using space on the hard versus in conjunction with dry docking. They expect to service vessels traveling to Jacksonville and Norfolk areas from the Carolinas and Georgia.

In addition, the Stevens Towing Shipyard facility will now be equipped to haul out 60’ wide barges – making them one of only a few yards in the US with that capability.

“Barges are getting wider – this is in response to new technology in cranes preventing excessive list during unloading. We are very excited to become a regional destination for that kind of service,” Johnson Stevens said.