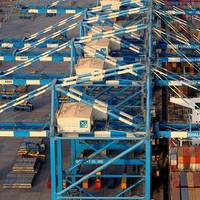 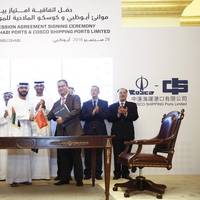 Drones: Is the Maritime Industry Ready? 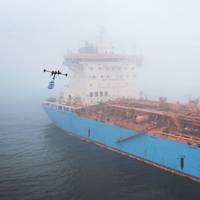 Unmanned aerial systems (UAS), or “drones” in common parlance, are not a part of the historical maritime vocabulary. At least not yet. While the term “drones” may conjure images from science fiction, the reality is that companies are designing commercial UAS for the private sector, and they are gradually permeating our daily life. Henry Ford is rumored to have opined on his invention of the automobile that if he had asked people what they wanted, they would have said “faster horses.” In the case of UAS…

The new cruise terminal at Zayed Port in Abu Dhabi, which will be capable of handling 2,500 passengers and three ships simultaneously, is set to become operational by the end of the year, according to a report in the National. Mohamed Juma Al Shamisi, the chief executive of Abu Dhabi Ports Company (ADPC) said that work was progressing in full swing and his company was aiming for an end-of-2015 finish to coincide with home porting plans of Royal Caribbean to base one of its Celebrity Cruise vessels at Zayed Port for the 2016-17 season. 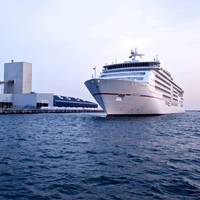 The concept design of Abu Dhabi’s planned permanent cruise passenger terminal is to be unveiled later this month at European cruise event, Seatrade Med 2014, from September 16-18 in Barcelona. The model is being showcased by Abu Dhabi Ports Company (ADPC) following an international design competition and extensive industry stakeholder input. An important element of the competition was the commitment to hire two leading Emirati architectural graduates, to join the project team for the development of the architectural design.

Abu Dhabi Ports Company (ABPC) says that general cargo moving through Abu Dhabi’s commercial Ports has increased by 37% this year. ADPC’s commercial ports (Musaffah, Khalifa and Zayed Ports) have handled 6.4 million FT (freight tonnes) of general cargo, compared to 4.7 million FT in the first half of 2014, which is an increase of 1.74 million FT (freight tonnes) compared with the same period in 2013. “These figures show a strong first half of 2014 and indicate a promising six months ahead”, said Capt. Mohamed Juma Al Shamisi, CEO, ADPC. The concession for the management and operations at Zayed Port will be returned from Abu Dhabi Terminals (ADT) to the port authority, Abu Dhabi Ports Company (ADPC) on 31, December 2013. The port informs that the concession is being returned to ADPC in line with the original planning for port capacity for the emirate of Abu Dhab which was outlined when ADPC was established. They explain that ADT and ADPC have a long established close working partnership and have assembled a dedicated specialist team to manage the handover. 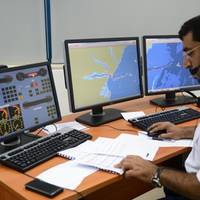 The  cruise ship 'MV Costa Fortuna' was warmly welcomed on its intitial visit to Abu Dhabi, which it will follow with regular weekly calls until March 2014. Mohamed Juma Al Shamisi, Acting CEO, Abu Dhabi Ports Company (ADPC) handed over a commemorative plaque to Captain Massimo Garabarnio to officially mark the ship’s maiden call to the city. Owners, Costa Cruises, say that the 'Costa Fortuna' carries 2,720 passengers and 1,027 crew. The  cruising speed of the 273m long ship is 20 knots and she is of 102,587 gt. 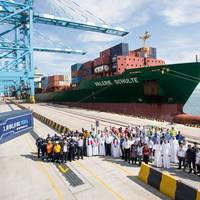 Abu Dhabi Ports Company (ADPC) and Abu Dhabi Terminals (ADT) say that a million TEU containers have been handled at Khalifa Port since its commercial opening. Khalifa Port began commercial operations at the end of last year when all container traffic was transferred from the city centre port Zayed Port, to the country’s new  flagship Khalifa Port. In October 2013, more than 100,000 TEUs passed through the port in just one month, and according to the operators these are very significant figures for Khalifa Port and the highest number of containers ever handled in a single month in the Emirate. 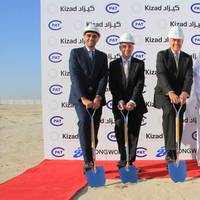 Khalifa Industrial Zone Abu Dhabi (Kizad), a subsidiary of Abu Dhabi Ports Company (ADPC), and Polysys Additive Technologies Middle East (PAT ME) held a groundbreaking ceremony, laying the foundation for its One Pack Systems (OPS) manufacturing plant which will be located in the industrial zone within the dedicated mixed use cluster covering an area of 197,424 square feet. PAT ME signed a 30-year Musataha agreement with Kizad. The plant, which is expected to be finalized by 2014, will focus on the production of polymer stabilizers called Songnox One Pack Systems. 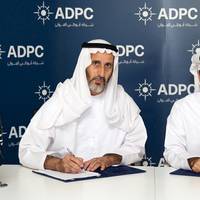 Abu Dhabi Ports Company (ADPC) has signed a ten year agreement with Emirates Aluminium (EMAL), to handle the export logistics of finished aluminium products from EMAL’s production site. The volume of exported metal will grow gradually from 600,000 metric tonnes in 2014 to 750,000 in 2015 onwards. The signed agreement covers all of the handling operations and transport logistics for the finished products from EMAL’s site to the container freight station and export terminal at Khalifa Port. 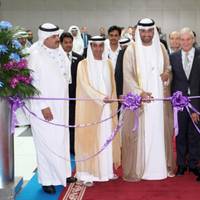 After a record-breaking opening day at the Middle East Workboats & Offshore Marine 2013, when six new contracts were signed on site, more were to follow, including a crew boat construction order for Grandweld. The Middle East’s largest shipbuilder Grandweld Shipyards secured a repeat order worth AED18.35 million to build a new 42 metre aluminum crew boat for Khalid Faraj Shipping. This is the third order received by Grandweld from Khalid Faraj Shipping over the last five months. “The crew boat is based on Grandweld’s existing proven design, and can reach speeds in excess of 26 knots. The United Arab Emirates, in a partnership between the Ministry of Foreign Affairs, global marine terminal operator DP World and Abu Dhabi Ports Company, will convene a third high-level, public-private counter piracy conference, in Dubai, on 11-12 September 2013. The conference is by invitation only.

Abu Dhabi Ports Company (ADPC) has signed a MoU with Abu Dhabi Terminals (ADT) & several government agencies with the aim of speeding up port formalities. The MoU, signed on the sidelines of the recent World Ports and Trade Summit 2013 (WPTS), in Abu Dhabi was between ADPC; Abu Dhabi Food Control Authority (ADFCA); Abu Dhabi Customs Administration (ADCA); and Abu Dhabi Terminals. Intended to act as a ”One-stop-shop” for the ports’ service and to integrate and accelerate the flow of trade-related documentation and information, the ‘Ports Community System’ (PCS) acts as a secure, centralisedelectronic systemthat manages the exchange of information between all the relevant parties. 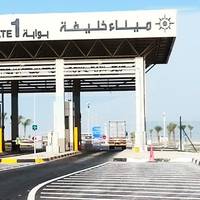 Abu Dhabi Ports Company (ADPC) introduce a new electronic system for processing daily and visitor passes for land and seaborne traffic into and through Abu Dhabi ports – the ‘e-Pass’. With over 1,500 daily passes and an average of 150 visitor passes handled every day, the new ‘e-Pass’ system is expected to significantly reduce processing and waiting times for customers. In order to inform all relevant customers of the new accelerated online processes, shipping lines and agents…

UAE-based GMMOS Group has rebranded to Stanford Marine Group (SMG), according to a report on TradeArabia News Service. The group has two main divisions focused on the marine sector: Stanford Marine (OSV chartering) and Grandweld (shipbuilding and repair). Stanford Marine has recently taken delivery of several new OSVs, such as the three ultra-modern 58-metre DP1 platform supply vessels (PSVs) Condor, Osprey and Caracara - which are already chartered – and will be welcoming in its fleet further four new vessels this year, amongst which will be two 87-metre diesel electric DP2 PSVs with methanol carrying capacity. With a fleet utilization level in excess of 90 percent for its current 35-vessels strong fleet… 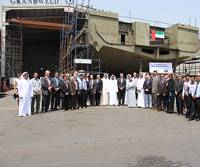 The new escort tugboats will be manufactured by Grandweld, a UAE-based shipbuilding, ship repair and conversion specialist, which was chosen after a close evaluation process of over eight worldwide shipbuilders. The keel laying ceremony was held on Thursday the 15th of September in Grandweld’s Shipyard in Dubai and was presided over by Captain Mohamed Al Shamisi, Vice President-Ports Operations of ADPC, who gave a welcoming speech and described the event as a momentous and proud occasion for ADPC. 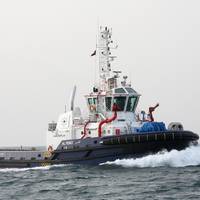 The Al Fenci and Al Durrah, the first two new RAmparts 3200 tugs have been successfully delivered to Abu Dhabi Ports Company by Grandweld Shipyards. The vessels are specially designed to assist in marine and Harbour operation at Khalifa Port including escorting & towing, mooring/unmooring, and fire-fighting operations. The design is based on an intended low-manning operation, with a high standard of machinery automation. Particular attention has been paid to the crew comfort, with high levels of noise and vibration control. This is has been certified by ABS with the HAB notation for workboats. 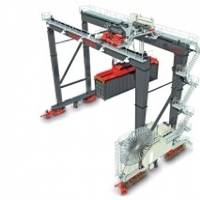 Konecranes contracted to deliver 12 new cranes to the commercial Khalifa Port container terminal in Abu Dhabi. The company has received an order for twelve cranes for the new Khalifa Port where it has already delivered 30 automated stacking cranes. The port started its commercial operations in September this year. Khalifa Port is owned by the Abu Dhabi Ports Company (ADPC) and operated by Abu Dhabi Terminals (ADT). Konecranes new order includes cranes with a lifting capacity of 40 tons, and they are equipped with automation controls. 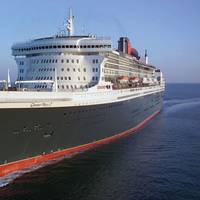 Cunard cruise ship 'Queen Mary 2', is set to make its maiden call in the capital on 29th January. Queen Mary 2’s stop in Abu Dhabi is part of her 2013 World Voyage – a 106-day voyage from Southampton in the UK which will take in five continents – and is considered a significant boost to the UAE capital as it increasingly becomes an established global cruise destination. Officials believe the visit will boost Abu Dhabi’s profile as it seeks to receive 180,000 cruise passengers in the current cruise season.