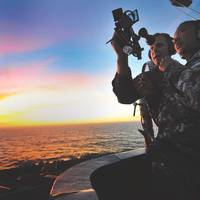 The increasing automation of vessels is causing some mariners to lose basic maritime skills. During dinner on June 10, 1995, the last night before the cruise ship Royal Majesty was due to arrive in Boston from its voyage to Bermuda, the master bragged to the passengers at his table that his ship could never run aground because it had all the latest electronic equipment, including a navigation system that integrated the GPS signals and other information. At 2225 that night the ship grounded on the Rose and Crown Shoal near Nantucket. It was 17 miles west of its planned trackline.

Maritime New Zealand has approved a pause in work on salvaging the Rena while the wrecked cargo ship’s owners wait for their resource consent application to be heard. The ship's owner Daina Shipping has been seeking permission to leave sections of the wreck and some debris on Astrolabe reef, where the container ship grounded in 2011. Maritime New Zealand said the pause would take effect only once the wreck reached the state set out in the consent application, which was expected to be heard later this year. Vesper Marine has been awarded the contract to provide Virtual Automatic Identification System (AIS) Beacons to mark seven reefs hazardous to shipping in the Bay of Plenty, as well as provide a coastal monitoring capability. The beacons will alert ships’ crews and the local government’s Regional Council that a vessel is heading towards a charted danger or entering the no-go zone around each hazard. The contract is in response to the October 5, 2011 events that resulted in the worst environmental disaster in New Zealand’s history… 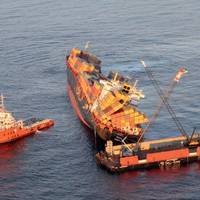 New Zealand's Transport Accident Investigation Commission (TAIC) published its final report into the grounding of containership Rena in October 2011. The TAIC’s investigation found that the grounding was a result of improper crew practices, and that equipment/machinery malfunction played no part in the incident. According to the report, the Liberian-registered containership Rena had left the New Zealand port of Napier at 10:20 a.m. on October 4, 2011 bound for the New Zealand port of Tauranga. The master had given an estimated time of arrival at the Tauranga pilot station of 3 a.m. 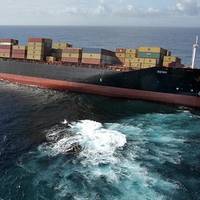 Maritime New Zealand (MNZ) welcomes the release of the independent review of its response to the grounding of the Rena, and the announcement of $2 million of government funding to help improve New Zealand’s maritime response capability. The report, by independent reviewer Simon Murdoch, was released today by Transport Minister Gerry Brownlee. MNZ Director Keith Manch said the organization was already implementing a number of the review recommendations and the funding package would help MNZ develop a wider strategic and operational response to maritime incidents. In the review report, Mr. Heavy fuel oil on board the wrecked container ship is expected to leach out over time, but the ship's owners and insurers would prefer to leave it where it is. No decision had been made on leaving Rena on the reef, but draft assessments have been distributed for stakeholder and regional council review. Meanwhile the Maritime New Zealand order for full wreck removal remains in place, reports the Bay of Plenty Times. Matt Casey QC, and Keith Frentz from Beca AMEC, recently presented a report to the Tauranga City council on behalf of Daina Shipping Company and insurer The Swedish Club. 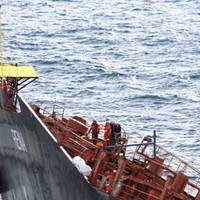 Following six weeks of intensive operations RESOLVE Salvage & Fire announce removal of 600 tons of steel from the bow section of the Rena wreck off Tauranga, New Zealand. RESOLVE has been removing the wreck piece by piece using helicopters and a transport barge at a safe distance from the reef. Due to the precarious position of the wreck’s bow on the Astrolabe Reef, and the nationwide concern in New Zealand over the potential for additional damage to the reef during salvage operations, RESOLVE’s methodology using helicopters was chosen from a number of other proposals. 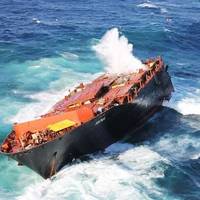 The Braemar Howells/Unimar latest update informs recovery milestone passed, there now remain 365 containers to recover. A total of 1368 containers were onboard the Renawhen grounded on the Astrolabe Reef nearly on 5 October 2011. Braemar Operations Manager Mike Richards says the milestone was reached this week after the positive identification of more container parts hauled up from the seabed at the wreck site. Mr Richards says the work of identifying containers from numbers on scrap recovered has been a huge behind-the-scenes task in its own right…

Ship captain Mauro Balomaga, 44, and navigator Leonil Relon, 37, released after serving seven months in New Zealand prison. The pair  were sentenced to seven months' jail in May for operating a vessel in a manner likely to cause danger, discharging a contaminant and altering ship documents. With sentences under two years, the Filipino men were to be automatically released after serving half of their jail term.Balomaga's lawyer Paul Mabey confirmed to Fairfax NZ News that the pair were being released from Waikeria Prison and would then be deported to the Philippines. The men were charged under the Maritime Transport Act, Resource Management Act and Crimes Act after the Rena crashed on the Astrolabe Reef on October 5 last year.

US salvage company Resolve has taken over the salvage contract of the wreck on the Astrolabe Reef, New Zealand. The salvors have started cutting up internal sections of the bow of the container ship which ran on to the Astrolabe reef off Tauranga in October last year and broke in two during a storm in January, reports 'ninemsn' online. A spokesman, Steve Fisher, told AAP preparatory work had begun on cutting up the internal bow sections with a view to removing scrap next week. Meanwhile, the ship's insurer, The Swedish Club, was conducting studies on whether the bow should be removed entirely or levelled to below the water line. The stern section of the Rena is lying on a slope at a depth of up to 65 metres, while part of the ship's navigation bridge is 10m below the surface. 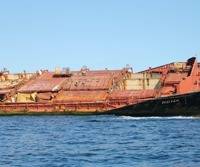 MNZ laid six charges against the Master, Mauro Balomaga, and five charges against the Second Officer, Leonil Relon, following the grounding. Both men pleaded guilty to all charges against them.The two men were  each sentenced to seven months imprisonment. The Director of MNZ, Keith Manch, said the two senior officers, who were responsible for the navigation of the ship, had breached basic principles of safe navigation. After a passage plan for the journey from Napier to Tauranga had been prepared, the Master had given approval for the Second Officer to deviate from the plan to make good time. 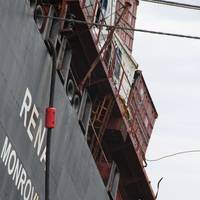 RENA Container Recovery Passes 800 Mark. The number of containers recovered from the stricken Rena on Mount Mauganui’s Astrolabe Reef has risen above the 800 mark. A total of 815 of the 1,368 containers have now been brought to port. Braemar Howells’ operations manager Neil Lloyd confirmed numbers were boosted this week with 21 containers landed on Monday, and a further eight on Tuesday. The good weather and calm sea conditions had enabled the good progress, and also favoured continuing shoreline debris recovery operations. 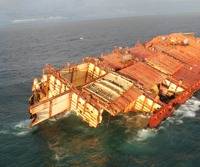 Maritime New Zealand (MNZ) has charged the owner of the cargo vessel Rena, following the ship's grounding on Astrolabe Reef off Tauranga on 5 October. An over flight by MNZ noted damage to the forward section bulkhead between No 2 and No 3 hold. It was evident that the bulkhead on the port side had failed and was open to the sea. This is expected given the gradual deterioration of the wreck and its exposure to the elements. Debris from Rena has washed ashore at Tairua, in the Coromandel. 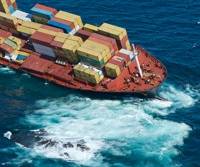 National On Scene Commander Rob Service said it was impossible to calculate exactly how much oil leaked during the recent heavy weather event, however, it was only a very small amount. While some of this oil appears to have reached the shoreline, it is unlikely to have a significant impact. The oil spill response team will closely monitor the situation over the weekend and remains ready to mount whatever response is necessary. A full team of 16 Svitzer salvors are on board Rena, examining the damage resulting from the recent heavy weather event. 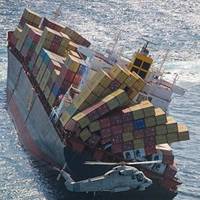 The Master and Second Officer of the cargo vessel Rena pleaded guilty to 10 out of the 11 charges laid by Maritime New Zealand (MNZ) against the men following an investigation into the ship's grounding on the Astrolabe Reef off Tauranga on 5 October. MNZ charged the Master and the ship’s Second Officer (Navigation) with a number of offences following the ship’s grounding. On 12 October, MNZ charged both men under section 65 of the Maritime Transport Act (MTA) 1994, “for operating a vessel in a manner causing unnecessary danger or risk”. 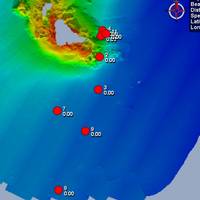 A WASSP Multibeam Sonar is being used by hydrographic surveyors at the grounding of the 236m-cargo vessel MV Rena on the Astrolabe Reef off the coast of New Zealand, to locate lost containers. Marine electronics manufacturer WASSP Ltd, a world leader in multibeam sonar technology has provided one of their WASSP sonar systems for the salvage effort. Within 48 hours of the WASSP arriving in Tauranga, it had been used to identify 12 targets, 7 of which were submerged containers…