Hurricane Paine formed in the Pacific more than 300 miles off the coast of Mexico early on Monday and is forecast to begin weakening later in the day, the National Hurricane Center (NHC) said. Mexico has no coastal warnings in effect for Paine, which is expected to weaken substantially before it hits the upper portion of the Baja California peninsula by early Thursday, the Miami-based center said. At 0900 GMT, Paine was 340 miles (547 km) west-southwest of the southern tip of Baja California, blowing maximum sustained winds of 75 miles per hour (121 kilometers per hour) and moving northwest at 15 mph (24 kph), the NHC said. According to the NHC forecasts, the storm will gradually arc toward land over the next day or two, and be a tropical depression by the time it reaches the coast. 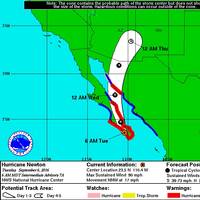 Hurricane Newton barreled up Mexico's Baja California peninsula tourist haven on Tuesday, dumping heavy rains as winds whipped, but there were no immediate reports of major damage. The category 1 hurricane hit the resort of Cabo San Lucas early on Tuesday morning, and then headed north, with the eye of the storm over the south of the peninsula. It is currently low season, and hotels popular with American tourists were not full, staff said. The storm lay around 50 miles (80 km) northwest of Cabo San Lucas, with maximum sustained winds blew at 90 mph (144 km), the U.S.

Tropical Storm Javier lost a little strength on Monday evening as it traveled towards the southern part of Mexico's Baja California peninsula, the U.S. National Hurricane Center (NHC) said. The storm was moving northwest at 5 mph (8 kph) and had maximum sustained winds of 60 mph (97 kph), the NHC said. "A weakening trend is forecast to begin by Tuesday afternoon," it said, adding that Javier was about 30 miles (48 km) south-southeast of Cabo San Lucas, a popular getaway for U.S. visitors on the peninsula. The NHC had earlier reported that the Mexican government discontinued a hurricane warning for Baja California, after the storm failed to pick up strength on its path northward.

Tropical Storm Javier formed off of Mexico's Pacific coast on Sunday, unleashing intense winds amid expectations it will churn north toward Baja California and the beach resort of Los Cabos, the U.S. National Hurricane Center (NHC) said. Javier was producing maximum sustained winds of 45 miles per hour (72 km per hour), and was located some 110 miles (177 km) west of the port of Manzanillo. "The center of (Javier) should pass offshore of the southwest coast of Mexico today, and approach the southern portion of the Baja California peninsula on Monday…

Interests in southern portions of the Baja California peninsula have been advised to monitor the progress of Sandra, as Tropical Storm or Hurricane Watches may be required for portions of this area later today (25 November). According to the Hurricane Sandra Advisory No.7 issued at 0900 UTC today by the USA’s National Hurricane Center in Miami Fl, the center of Hurricane Sandra was near latitude 12.5 North, longitude 109.0 West. Sandra is moving toward the west-northwest near 10 mph (17 km/h) and a turn toward the northwest is expected later today, with a turn toward the north on Thursday.

Hurricane Blanca weakened to a category 1 storm on Friday but is still expected to hit Mexico's Baja California peninsula on Sunday, the U.S. National Hurricane Center said. Blanca, the second hurricane to form off Mexico's Pacific coast this year, is about 330 miles (531 km) southwest of the major port of Manzanillo, with maximum sustained winds of 90 miles per hour (145 km), the Miami-based NHC said in a report. The NHC expects the hurricane, which earlier in the week had been as strong as a category 4… 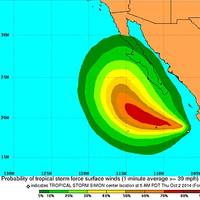 Tropical storm Simon formed early on Thursday off Mexico's Pacific coast, but it was projected to wheel out to sea in the coming days. The U.S. National Hurricane Center said that as of Thursday morning, the storm was about 360 miles (580 km) south-southeast of the southern tip of the Baja California peninsula, which was slammed by Hurricane Odile last month. Simon was moving to the west-northwest and could become a hurricane by Saturday, the Miami-based center said. Odile plowed into the southern tip of Baja last month as a category 3 hurricane.

Tropical storm Polo barreled nearer on Friday to the Mexican Pacific resort of Los Cabos where thousands of troops were restoring order following widespread chaos caused by Hurricane Odile at the start of the week. Odile plowed into the southern tip of the Baja California peninsula on Sunday as a category 3 hurricane, causing major damage to beach resorts and sparking widespread looting. The U.S. National Hurricane Center said a tropical storm warning was in effect from Santa Fe to La Paz on the normally arid peninsula, adding that Polo could dump rains from Jalisco state to the southern port of Baja California. At around 2100 GMT, Polo was moving northwest at 6 miles per hour (10 km per hour) and is expected to veer further westward over the next 48 hours…